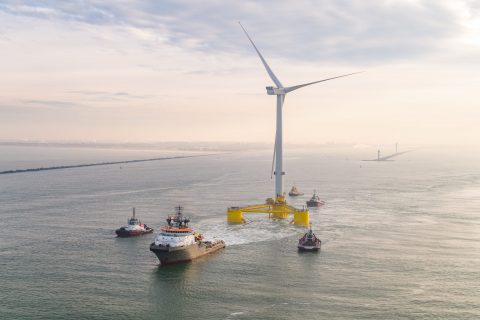 Approximately 15 kilometres off the coast of Aberdeen in Scotland, Grupo Cobra is working on the Kincardine project, one of the first commercial floating wind farms in the world. Being involved as the transport and installation contractor, Boskalis talks about the ins and outs of the project.

Floating wind farms are mainly installed in areas where the water is too deep to install turbines on foundations such as monopiles or jackets on the seabed. In the near future, these will be the waters off South Korea and Japan, but also the east coast of the United States, the Mediterranean Sea and the northern North Sea.

In Northwest European waters, fixed wind farms are the most obvious option due to the shallow water depth and lower costs. In the future, when the costs come down, floating wind may become an interesting option too. For the time being, though, floating wind farms are small-scale projects, sometimes even in the form of demonstration projects. It is expected that floating wind will take off after 2025, with the wind farms becoming steadily larger.

A floating wind turbine can be described as an enormous anchored float. They come in the form of a spar, a floater and a tension leg. The anchoring system consists of drag anchors, suction piles or driven piles to which chains, steel wires or polyester lines are attached, which are in turn connected to the floaters.

“The type of anchoring system depends on the water depth, the size of the floater and the weight. For Kincardine we use drag anchors”, says Boskalis’ managing director marine services Steve Van Hulle. “The advantage of floaters is that they can be disconnected relatively easily. That is ideal for the future to carry out maintenance on the turbines.”

The floaters for the Kincardine project are semi-submersible foundations, each connected by three chains of 100/150 mm thick at a depth of 50 metres. But since floating wind is still in its infancy, own designs for floaters and anchoring systems are still being experimented with.

For Boskalis, the floating wind industry offers great opportunities for its large fleet of semi-submersible heavy transport, which are usually used for transport and installation of oil and gas platforms. “We already had expertise in the field of fixed wind farms and in the area of cable laying. But in addition, we also have experience with the transport and installation of oil platforms and FPSOs, including pre-mooring installations, towing, positioning and hook-ups. We are now bringing that expertise to floating wind”, says Van Hulle.

The transport work that Boskalis carries out within the scope of the Kincardine project can be wet or dry. In the latter case, the company works with a transport barge, which it tows. “In Spain, we roll the foundation onto the barge. Then we transport it to a sinking location in the port of Rotterdam, where we do the float-off. The client then has the turbine installed at height”, Van Hulle explains. Alternatively, Boskalis can work with one of its heavy transport vessels instead of a barge.

After this pre-commissioning, the floater is towed with a heavy sea tug, in this case the Manta, via the deep-water route towards Scotland. “This trip takes eight to nine days at an average speed of 3 to 3.5 knots. We cannot sail too fast because of the forces that are exerted on the steel of the turbine”, Van Hulle says.

Once at the Kincardine wind farm site, Boskalis uses a tugboat to bring the floater into position while the anchor handling tug Nicobar serves as the hookup vessel and provides accommodation for the team.

So far, two floating turbines have been successfully installed for Kincardine. Boskalis is scheduled to pick up the third floater in Spain in mid-March and tow it to the site in mid-April. This will be followed by numbers four and five.

“Normally you don’t do that kind of work in winter but because of the corona crisis, the whole schedule has been shifted. In Spain in particular, they had to deal with a lot of problems and delays due to Covid-19”, says Van Hulle.

Kincardine is a special project for Boskalis. Not only because it is one of the first commercial floating wind farms in the world, but also because with a nominal capacity of 50 MW it is currently the largest. “We want to take advantage of this because we are very ambitious when it comes to floating wind”, says Van Hulle.

For Boskalis the project is a prelude to and preparation for the larger commercial floating wind farms. In this way, the company wants to increase its knowledge and build up a track record. This will allow Boskalis to implement the lessons learned at the earliest possible stage.

“In this kind of work, it’s all about efficiency of the various cycles”, Van Hulle explains. “With floating wind, think of the pre-mooring cycle, the hookup cycle, etc. You try to make each part as efficient as possible and to limit the execution risks. This is certainly the case if, in the long run, your scope of work exceeds the transport and installation of the turbines alone.”

This article first appeared in Dutch on Schuttevaer, a sister publication PCJ. 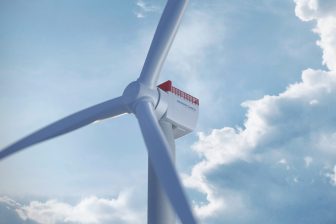 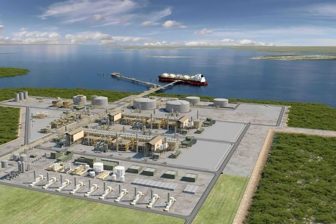 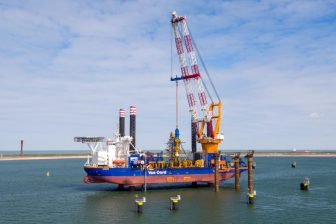