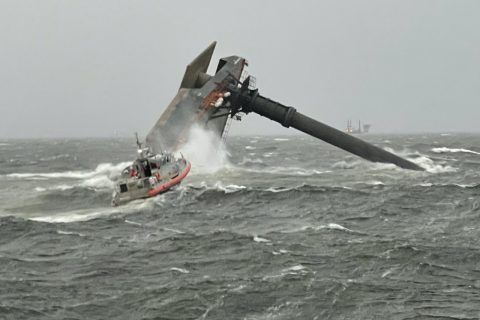 One dead and twelve missing after liftboat capsizes off Louisiana coast

At least one person has been killed and twelve others are missing after a ship capsized in a hurricane south of the port of Port Fouchon, in the US state of Louisiana on Tuesday. It concerns a commercial lift vessel also known as a liftboat or jack-up barge, which is used to access oil platforms. Six crew members were rescued, reports the US Coast Guard.

Rescue ships, planes and volunteers are searching for survivors in the Gulf of Mexico. The 39-metre vessel called Seacor Power capsized on Tuesday 13 April around 4.30 pm (local time), about 13 kilometres from Port Fouchon.

Rescue workers are searching the area, reports Coast Guard Captain Will Watson. He says there may still be survivors on board the capsized vessel. ‘We are doing everything we can,’ he says. So far, Coast Guard rescue crews have searched more than 1440 square miles, during a combined search period of nearly forty hours.

‘Unfortunately, one person was found dead on the surface of the water,’ Watson adds. Two survivors were picked up by the Coast Guard and four others by other vessels, which had responded to an urgent marine information broadcast by Coast Guard watchstanders.

According to the Coast Guard captain, there were winds of nearly 130 kilometres per hour at the time of the capsize. There would have been waves between two and three metres high.

A liftboat, which is a small type of jack-up platform, is used by energy companies to work on drilling rigs or to reach drilling rigs. This type of vessel has several extendable long legs with which the seabed can be reached so that a platform can be jacked up. The Seacor Power is owned by Seacor Marine. It operates a fleet of fifteen liftboats.

#UPDATE The @USCG continues its search efforts for 12 missing members from the capsized lift boat 8 miles south of #PortFourchon, #Louisiana.

Picture by the US Coast Guard.