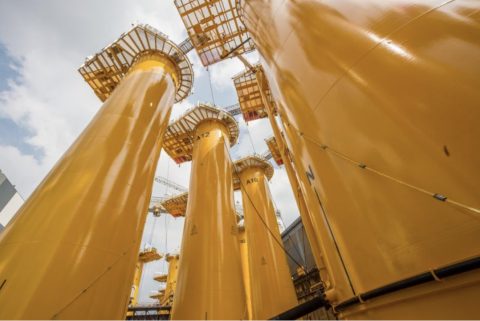 Steelwind Nordenham, a Dillinger Group company, has signed an agreement to build and deliver 64 steel monopile foundations for the He Dreiht offshore wind farm, under development by Energie Baden-Württemberg (EnBW). The contract between the two companies schedules the production of the monopiles to start in August 2023.

The He Dreiht offshore wind farm is situated in the German North Sea, 85 km north of Borkum island and 110 km west of Helgoland island. It is one of the largest offshore projects in Europe, and will be one of the first in the world to operate without government subsidies. It is scheduled to be operational in 2025, with a grid connection capacity of 900 MW, and the energy generated will be able to power a million households. Construction should begin in the first half of 2024.

Steelwind Nordenham, a Dillinger Group company,  will supply EnBW with 64 monopiles for the wind farm. The company has been specialising in monopile production since 2014. Each single-piece monopile, the steel tubes driven into the sea bed, will weigh up to 1,300 tons, and measure about 70 metres in length, a diameter of 9.2 metres. The high-performance plate, specially developed for the offshore wind sector, used for the monopiles, will be manufactured by Dillinger in Saarland. Furthermore, the single-piece monopile design integrates certain parts of the transition piece into the monopile itself, allowing for a lengthier final product.

The transition pieces will measure up to 30 metres high and almost to 8.5 metres in diameter. Each element will weigh over 700 tons, including secondary steel. All together the 64 transition pieces will weigh 36.3 Kton. Raf Iemants, Managing Director of Smulders says: “The order is one of the largest in our history and will occupy a significant part of our capacity in the coming years.”

To accommodate increasingly large components and structures, Sif Group has completed the extension of its new quay at the Port of Rotterdam. Heerema Marine Contractors has been contracted by EnBW to transport and install monopiles and transition pieces at the He Dreiht offshore wind farm. The installation itself  will be executed by Cadeler in 2025, using an O-class vessel, featuring a new crane with a lifting capacity of 1600 metric tons at a radius of 40 metres.

Offshore wind farms can produce cheap green power that is generated comparatively continuously. Because of this, they are contributing significantly to the energy transition and to achieving EU climate protection targets.