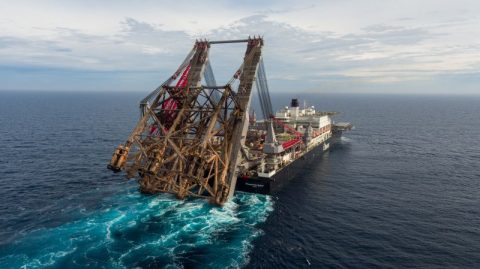 The world’s largest construction vessel, Allseas’ Pioneering Spirit, has safely removed and transported to shore the 11,000-tonne jacket of the Gyda platform and delivered it to Aker Solutions’ disposal yard in Stord, Norway. The jacket was placed quayside, by the Gyda’s topsides, which was removed by Pioneering Spirit on May 24th.

The Gyda oil and gas platform, in the southern Norwegian section of the North Sea, is being decommissioned after being operated for three decades. Repsol Norge obtained permission to decommission the 30,000-tonne Gyda platform, from the Norwegian government. Around 98% of the facilities are expected to be recycled.

The structure’s 24 foundation piles were cut below seabed level, to facilitate removal. Main hoist blocks were suspended from the Jacket lift system (JLS) beams, and connected to pre-installed rigging. This was the whole structure was lifted in alignment with the lifting beams.

Because Gyda’s jacket was built and installed vertically, the structure could not withstand horizontal loading or transport. As such, it was transported in a near-vertical position (60%). Grillage and interface support also made delivery possible.

This project was the Pioneering Spirit’s heaviest ever but remained within the catamaran crane vessel’s 20,000-tonne lift capacity. Due to the vessel’s schedule, the project was split across two campaigns. The removal and transportation of the entire Gyda platform took 12 days and was completed on July 19th, 2022.