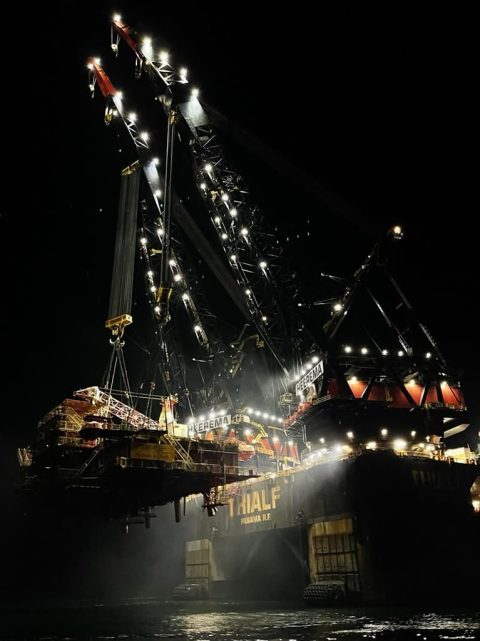 Heerema Marine Contractors successfully removed the Kinsale Alpha topside, in the Kinsale Area gas fields, in the Celtic Sea, approximately 40km to 70km off the south coast of County Cork in Ireland.

To this end, Heerema used their second largest semi-submersible crane vessel (SSCV), the Thialf, which has a lifting capacity of 14,200 metric tons. Its capacity is second only to the Slepnir, which can lift 20,00 metric tonnes. Heerema previously performed the hooking down and removal of the decommissioned PSE Kinsale Energy Bravo platform using the Thialf in June of this year.

Following removal, the Alpha topside structure will be transported to the Hoondert Services & Decommissioning (HSD) yard in Nieuwdorp, Zeeland, in the southwest of the Netherlands. There up to 97% of the materials will be reused and recycled.

It will be brought there thanks to the Bylgia anchor handling tug, which is the sister ship of the Kolga tug, used for the Bravo platform. The Alpha platform will also be transported on the H-541 barge, the same also used to transport the decommissioned Bravo platform in June.