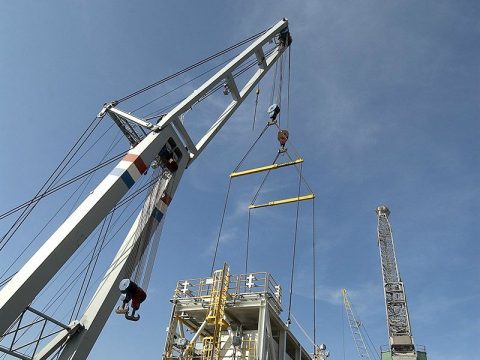 ‘The breakbulk market on the quay and that on the water seem like two completely different worlds that co-exist in parallel’, it says in the opening story of this edition of Spotlight, which is fully dedicated to breakbulk in all the varieties of cargo and activities that this entails. While ship owner often need to fight for market share, the terminals active in general cargo, heavy-lift and project cargo are doing very well. In the ports of Antwerp and Rotterdam in particular, substantial investments are being made in dry bulk capacity – while Zeeland Seaports holds a particularly strong position in off shore.

More specifically, the Off shore & Heavy Lift Centre that arose at the Broekman Breakbulk Terminal in Rotterdam’s Waalhaven is especially striking. The activities focus on the energy and off shore industry, which is increasingly performing assembly activities directly on the water. Earlier, Broekman also further expanded the Distriport Terminal on the Theemsweg in Rotterdam with a ro/ro ramp and 50,000 m2 of storage, transhipment and distribution capacity. Rhenus Deep Sea Terminal is expanding as well with a second quay at the Maasvlakte and later this year SIF Group and Verbruggen International will open a terminal; covering 42 hectares, a location will be realised for the production of foundations for, among other things, off shore wind farms. We see a similar development in other ports. Antwerp is greatly expanding its capacity and Zeebrugge remains the largest car port in the world.

Obviously, the breakbulk segment is seeing more positive development than container shipping and container terminals. Drewry may expect the growth in breakbulk to slow down this year, but at least there is still growth. And this can definitely not be said for every maritime activity.

This article was published in magazine: In the spotlight breakbulk