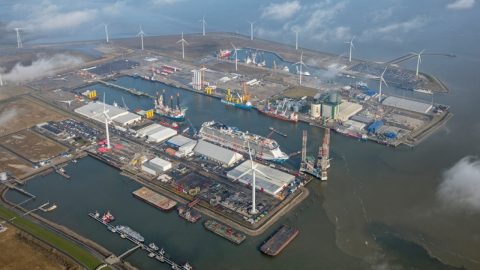 Another offshore wind project for Eemshaven

Orange Blue Terminals and the international wind turbine manufacturer Senvion have signed a contract for the planning, transport, storage and pre-assembly of wind turbine components for the Trianel Borkum II wind farm.

This means that all the above-water parts of the wind turbines will be supplied through Eemshaven, once again making the port the hub for a large offshore wind project. The project comprises the construction of 32 Senvion wind turbines, consisting of rotor blades of approximately 75 metres in length, 64 tower parts and 32 nacelles.

These segments are transported to Eemshaven, where a large part of the terminal will be dedicated to storage, logistical operations and assembly. The turbines are of the 6.2M152 type and their capacity easily exceeds 6 MW.