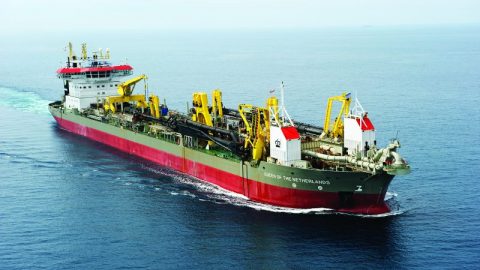 Boskalis in megadeal with Saudis

For the next six years, Boskalis is to perform installation operations worth ‘many hundreds of millions’ for Saudi Aramco, the world’s largest oil and gas company.

Together with Lamprell from the United Arab Emirates, the Dutch maritime contractor has been selected as a permanent contractor for an investment programme with an estimated value of three billion dollars a year. As part of this programme, Lamprell will build oil and gas platforms and Boskalis will take care of the installation. The contract includes two three-year options to extend.

Boskalis will still have to bid on individual tenders though, but the company will have an advantage over competitors in this respect as it will no longer need to pre-qualify. This will also speed up the allocation of projects.

Boskalis CEO Peter Berdowski speaks of ‘an important milestone’ that supports the strategic vision of the company. He goes on to say that the main focus for the coming year will be on tendering and the development of a local organisation in preparation for the implementation of projects.

The agreement is part of the Saudi state-owned company’s huge investment programme for the coming ten years. According to news agency Bloomberg, CEO Amin Nasser has stated that some 500 billion dollars is involved.

160 billion of this is presumably earmarked for natural gas projects and 100 billion for chemical projects. This fits in with the ambition of the world’s largest oil seller to become less dependent on ‘the black gold’.

Investors reacted positively to the announcement. The share price of Boskalis rose by 0.5% this morning compared to Friday’s closing price. On Friday, the group announced another major project: the installation of power cables from the offshore wind farms Arcadis Ost 1 and Baltic Eagle to a high-voltage substation near the German town of Lubmin. With a contract value of around 250 million euros, this is the largest cable contract for Boskalis to date.