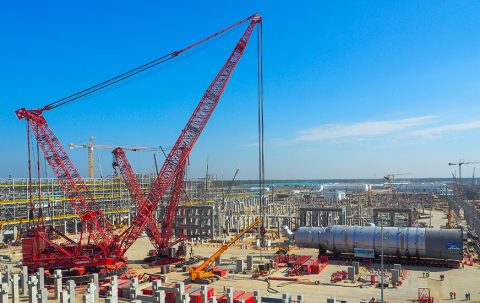 Mammoet and ALE today have announced that the two companies are negotiating a purchase agreement, under which Mammoet would acquire the British heavy lift and transport specialist.

If the talks do result in a takeover, Mammoet will significantly increase its lead over its Belgian competitor Sarens, which is the second-largest crane operator in the world.

Mammoet currently sits in pole position, as it has been since the first IC50 twenty years ago, with 2,850,000 index points. But in the past year, Sarens has massively reduced the gap between the companies and now follows Mammoet hot on the heels with 2,771,436 points.

That means that within 12 months, the gap between Mammoet and Sarens has been reduced from 554,145 points to only 78,564 points. “To give an idea of the difference, last year it was about the same as the size of Buckner’s fleet, at 8th place in the table, to now being similar to Crane Norway’s fleet from 62nd place,” the authors of the IC 50 write.

On the one hand, the gap was reduced by a decrease of Mammoet’s index, which fell 100,000 points. But to a greater extent, the gap has been closed by a significant expansion of Sarens’ capability, which added 375,581 tonne-metres to its fleet. A staggering 250,000 tonnes of that was added by just one crane, the SGC 250 super heavy-lift crane.

ALE currently sits in the third position with 2,295,623 points. That means that if the takeover happens, Mammoet will almost double its current fleet size. That lead will be difficult to close for Sarens without a takeover or merger.

At this point, Mammoet and ALE wish to refrain from publishing more details about their
acquisition talks, the companies state.