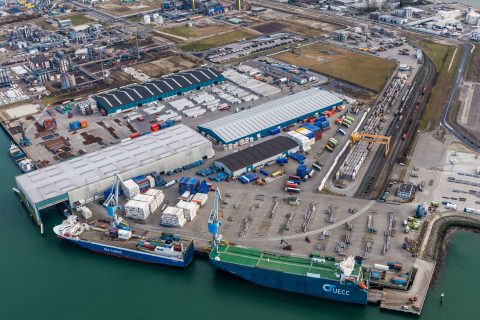 Throughput in Rotterdam reached a new record in 2018 thanks to growth in container transhipment, but growth in breakbulk remained flat.

At 469.0 million tonnes, the port of Rotterdam’s total throughput volume ended up slightly higher in 2018 than in 2017, which was itself a record year (467.4 million tonnes). Container transhipment was the engine of growth again, with a 4.5% increase in tonnage. Measured in TEUs, the standard unit for containers, the increase was 5.7% and the annual total was 14.5 million TEUs – also a record.

This strengthens the position of Europe’s largest container port in this strategically important market segment. Significant underlying shifts were observable in the goods segments. Whereas container transhipment continued to grow at a healthy pace, that of crude oil, mineral oil products and agribulk fell. Throughput of LNG (+163.6%) and biomass (+31.6%) saw a further spectacular rises last year.

In RoRo transhipment, which ended the year slightly up, the British RoRo trade showed less growth, probably due to the effects of Brexit uncertainty on the British economy. The transhipment of other breakbulk cargo was around the same as the volume in 2017, the Port Authority states. In 2017 Rotterdam handled 30.3 million tonnes breakbulk, of which 23.8 millions tons was RoRo cargo and 6.5 million tonnes conventional breakbulk.

Despite the market being under considerable pressure, the dry bulk segment showed only a slight downturn in throughput (-3%). In the coal subcategory, the consolidation strategy that is being used appears to be working well for Rotterdam: throughput rose by 2.3%. Thermal coal remained at the same level as the previous year. The throughput of coke coal rose thanks to success in attracting cargo packages for Germany. Iron ore throughput fell in 2018, among other reasons due to the renovation of a blast furnace and because of stagnating demand from the steel industry. The fall in agribulk throughput in Rotterdam was partly caused by the shift of cargo packages to Amsterdam.

To facilitate further growth of breakbulk throughput the Rotterdam Port Authority and four breakbulk and project cargo companies recently created a so-called ‘smart carrousel plan’, which gives each of the four companies room to expand their business.

The plan entails the redevelopment of the Waalhaven. In the coming three-and-a-half years, 12 hectares of industrial site and 1,155 metres of quay will undergo a user change. The industrial sites and port infrastructure will also be renovated by the Port of Rotterdam Authority. The aim is to give an additional growth incentive to the Rotterdam breakbulk sector.

‘We currently have a site on the Heijplaatweg and on Waalhaven Noordzijde’, stated Willem-Jan de Geus, Director of Metaal Transport. ‘We have also been leasing various warehouses throughout the port area to enable us to meet demand. With this new 90,000 square metre area of land on Droogdokweg, we can concentrate our activities and operate much more efficiently.’ Metaal Transport will retain the Heijplaatweg location, including the offices, and will construct a 25,000 square metre warehouse on the new site.