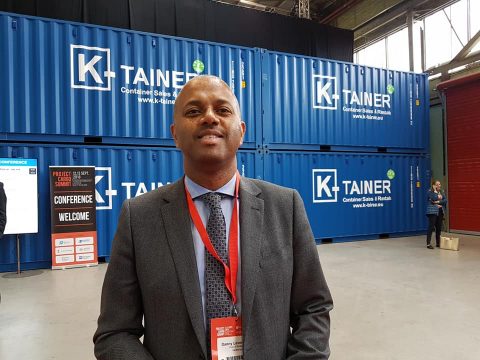 Port of Rotterdam: “We see room to grow our breakbulk throughput”

The Port of Rotterdam saw its conventional breakbulk volumes grow with 3.1% in the first quarter of 2019. The lifting of the American import ban on Russian aluminium had a lot to do with that, says Port of Rotterdam’s breakbulk director Danny Levenswaard in an interview with PCJ.

What cargo segments drove the first quarter growth?
The growth was mainly in non-ferrous metals, heavy and large project cargo (HLPC) and forest products. The throughput of steel remained fairly stable. Looking at project cargo specifically, the growth was largely driven by an increase in export of offshore wind related cargo.

How did the port manage to record a growth of 3.1%, while Europe’s biggest conventional breakbulk port saw its volume decline by 5%?
First of all, let me say we’ve only just had the first three months of the year. We recorded a nice growth rate, but we still have nine months ahead of us so we’ll have to see what happens throughout the year. Looking at the first quarter in detail we see the largest growth in March when Rotterdam’s breakbulk terminals recorded a growth of 13%. Although it might seem this is Brexit related, that’s not really the case for our conventional breakbulk volumes. Rotterdam is big in non-ferrous metals and that cargo stream was positively impacted by the lifting of the American import ban on Russian aluminium. Brexit did have a large impact on our ro-ro volumes, which in the first quarter grew with 10.7%.

How about the growth in project cargo, was that purely driven by the offshore wind markets?
Yes, that growth is mostly related to the increase of offshore wind-related cargo. We do see some movement in the oil and gas industry as well, as the increase in oil price seems to stimulate new activity in exploration and production, but it’s still nowhere near where it was before the oil price collapsed.

In general, the breakbulk market is heavily impacted by the ever-increasing containerization of goods and last year conventional breakbulk volume in Rotterdam remained flat. What are the port’s vision and strategy for the future?
Containerization is indeed a trend that has been impacting the market for over a decade, but we still see room to grow our breakbulk throughput and we’re investing in that as well. It is true that the throughput in 2018 remained flat on paper, but that was caused by a clearly identifiable cargo package in the year before. In 2016 and 2017 one of the large German steel mills was out of production for maintenance, which led to an increase of Brazilian steel slabs imports through the port of Rotterdam. It was a large, temporary and easily identifiable cargo flow handled by one party. If we exclude that from the figures, we actually saw growth in our cargo base.
To facilitate further growth in metals and project cargo we have designed the so-called “breakbulk carousel”, which will create extra terminal space per 2020. Additionally, we are creating a large area on Maasvlakte 2 for offshore related activities, primarily for offshore wind installation projects.

We need more base cargoes.

What does the “breakbulk carousel” encompass exactly?
Basically, we’re creating more terminal space for four breakbulk and project cargo terminals, which are Metaal Transport (non-ferrous metals and steel), Broekman Project Services (heavy lift, project cargo and offshore), J.C. Meijers (multi-purpose terminal) and RHB (specialist in heavy lift and project cargo).
Due to the ever-increasing size in containerships, container terminal operator ECT closed its terminal in the City area to consolidate its activities on the Maasvlakte which is located directly at sea. Port of Rotterdam has since been redeveloping the area. We had a lot of interest from parties who wanted to expand their facilities, including from the breakbulk and project cargo terminals. Part of this redevelopment is that terrain has been allocated to Metaal Transport which will concentrate all its activities in the port on this location. At the moment, the company’s activities are more scattered throughout the port. Consecutively, the move of Metaal Transport frees up space for Broekman Project Services, J.C. Meyer and RHB to expand their terminals as well. That’s why we call it the carousel.

What about the offshore centre on Maasvlakte 2, what can we expect from that?
Our ambition is to expand our position in the offshore markets and we have a site of 25 acres available for that. The development of this area has been slightly delayed as we were in talks with a consortium of companies to use the infrastructure, but that did not turn out how we wanted. Partially due to market circumstances, but also because we had different views. We are currently in direct talks with a potential user and we’re working full flex to make this project a success.

There seems to be a clear focus on steel, non-ferrous metals and project cargo. Can you elaborate on that?
Rotterdam is very well equipped for the handling of heavy and large project cargo. We have direct port access at sea, deepwater terminals and a unique offer of floating cranes to ease loading and offloading operations. We have plans to grow this segment even further but in order to do so, we need more base cargoes for ship operators.
Steel and metals are such base cargoes, but at the moment, Rotterdam is not in the top of shippers’ minds when it comes to steel or breakbulk even though we have very capable companies in the port. We see room to grow our steel volume and are working hard to do so. On one hand by facilitating the growth of our terminals, and on the other hand by lobbying and promoting our port as a breakbulk port. We feel the focus on combining cargo flows like that, will give us an edge in the future. Our aim is to make Rotterdam the breakbulk hub of Europe.

Are you visiting Breakbulk Europe this month and do you fancy a game of table football? Port of Rotterdam and the Rotterdam Port Promotion Council (RPPC) are organising the Breakbulk Table Football Championships at the event in Bremen. Teams can register here.