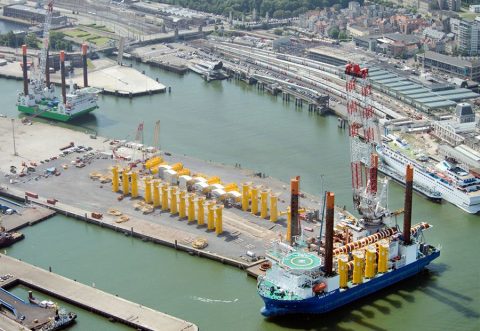 The Belgian Port of Ostend has announced its largest investment of the past 10 years. It will buy all the shares of the Renewable Energy Base Ostend (REBO) from DEME, PMV and Artes-Group in order to stimulate further growth.

The REBO terminal in the outer port of Ostend is a heavy load quay that specializes in storage, pre-assembly and shipping of wind turbine components. In 2010, the Port of Ostend attracted external capital to develop the port into “the logistics offshore wind hub of the southern part of the North Sea.” DEME, PMV and Artes-Group provided the needed capital.

After a risky start-up phase, the REBO terminal has become sufficiently mature and has a stable balance sheet, the port authority states. As a result the resources and expertise of the initial investors are no longer needed, the port adds.

“In order to strengthen the continuity of the port, it is important to increase the occupancy of the REBO terminal,” says Dirk Declerck, CEO Port Oostende. “The terminal has many assets, such as its exclusive location, the presence of heavy load quays and a ro/ro pontoon with a carrying capacity of 650 tonnes. Exploiting these assets to the fullest in combination with a broadening of the activity radius will contribute to the Blue Economy developments [..] of the Ostend region.”

Currently, more than 500 people are permanently employed in the offshore wind business in the port of Oostende.

“REBO is a good example of a project in which PMV was able to fully play its role as a do and dare company,” says senior investment manager Toon Van Ingelghem of PMV. “Nine years ago there were no offshore wind activities in Ostend and it was highly uncertain how this sector would develop. Together with Port of Ostend and the other partners, we have endorsed the vision for the offshore wind industry off the Belgian coast. REBO has become a hub around which world players such as Siemens Gamesa and MHI Vestas as well as suppliers for the offshore wind industry have established themselves. PMV is very proud to have helped realize this.”