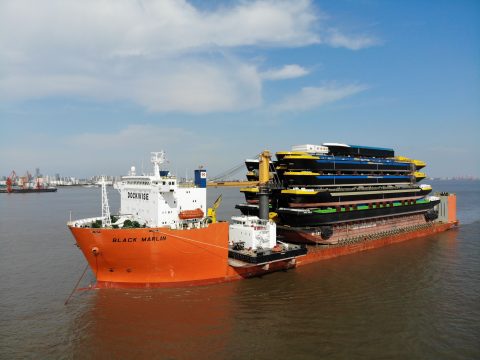 Rotterdam’s breakbulk volume has grown by 4.4% in the first nine months of 2019. The port authority says there was an increase in all traditional markets including aluminium and steel. On the contrary, Port of Antwerp last week reported a decline of 12.9% in steel volumes citing the trade war as the cause.

Throughput of conventional breakbulk has grown by 4.4% to reach 4.9 million tonnes. Port of Rotterdam notes there was an increase “across the breadth of several traditional markets, such as aluminium, steel and paper.” Heavy cargo and special projects such as hulls for inland vessels also resulted in more tonnes.

Total breakbulk volume including ro/ro traffic amounts to 23.3 million tonnes, reflecting an increase of 2.1% Rotterdam’s ro/ro traffic charted an “erratic” course that was strongly influenced by the possibility of Brexit.

“In the run-up to the initial Brexit date, a lot of additional stocks were piled up during the first quarter”, Port of Rotterdam states. “After the postponement of Brexit to 31 October, volumes then decreased in the period April-August. In September, we saw some growth again. The expectation is that this growth will continue to pick up in October in the run-up to the new Brexit date.” Despite the volatility, the port recorded a small increase in ro/ro of 1.5%.

The results stand in stark contrast to the throughput figures of southern neighbour Port of Antwerp, which reported a hefty decline of 12.9% in conventional breakbulk citing the trade war and economic slowdown as reasons. Despite the large drop, Antwerp still handled significantly breakbulk than Rotterdam with throughput reaching 6.6 million tonnes.

Port of Rotterdam handled 353.5 million tonnes of cargo in the first nine months of 2019. Compared with the previous year, this represents an increase of 1%. Volume growth was mainly driven by containers, crude oil, LNG and biomass. Like Antwerp, the port did notice effects from the trade war and the slowing economy.

“In the third quarter, we again saw healthy growth in terms of containers, one of the Port Authority’s strategic spearheads. What is worrying, however, is that the relationship between the world’s major trading blocs remains strained, as does the continuing uncertainty about the introduction of trade tariffs after Brexit”, said Allard Castelein, CEO of the Port of Rotterdam Authority.

Container traffic grew by 3.8% to 11.2 million TEU. This growth mainly took place during the first six months of the year, levelling off in the third quarter. ‘This was caused by an overall slowdown in the growth of global trade and a fall in short sea volume of freight being shipped to the Eastern Mediterranean’, the port states.