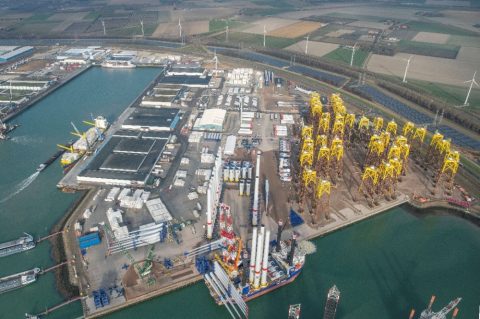 North Sea Port’s breakbulk and ro/ro volumes dropped significantly in the first quarter of 2020. The decrease is mainly a result of the global economic environment and not of the corona crisis. “But the impact of Covid-19 will be fully visible in the second quarter”, the port authority states.

The port’s breakbulk volume dropped by 12.3% to 2.5 million tonnes, but the transhipment of metal and steel structures actually increased. The drop was largely a result of lower cellulose imports, which is used to produce paper.

Ro/ro volume fell by 10% to 791,000 tonnes, partly due to a halt in production at some manufacturers and import restrictions for the United Kingdom.

Liquid bulk showed a sharp decline of 14.8% to 4.4 million tonnes, while dry bulk remained relatively stable at 8.2 million tonnes and container throughput increased by 11.6% to 659,000 tonnes as a result of the containerization of breakbulk.

The total volume of the Dutch/Flemish port combination fell by 6.6% to 16.7 million tonnes. “The impact of the coronavirus on the first quarter was minor. It would seem that it was rather the economic climate that affected transhipment volumes, including greater fluctuations in the prices of raw materials and oil. It goes without saying that the impact of the coronavirus will be fully visible in the second quarter”, the port authority states.

The port authority says it’s currently seeing “a very mixed picture” in terms of port activities. Some companies have temporarily halted their production or activities while others continue to operate as before, though often with a reduced staff or adjusted production. “The automotive, ro/ro and construction sectors, in particular, are feeling the effects of the coronavirus”, the port states, witnessing an initial decrease in the number of ro/ro vessel movements.

North Sea Port itself is also affected and expects both a loss of income and a fall in cargo transhipment. For now, the port is focussing on its core task: allowing ships to enter and leave the port at all times.