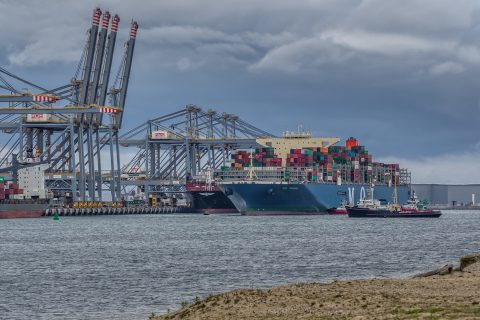 Throughput port of Rotterdam falls sharply, but less than feared

Throughput in the port of Rotterdam decreased by 9.1 per cent in the first half of the year compared with 2019, amounting to 218.9 million tonnes. Container throughput was only 3.3 per cent down on 2019 (in tonnes, 7 per cent in TEU). This equals 2.5 million tonnes less cargo.

Initially, Allard Castelein, CEO of the Port of Rotterdam Authority, feared a drop of up to twenty per cent, but so far this has not materialised. Despite the disruptive impact of the Covid-19 pandemic on the economy, production and logistics, the port of Rotterdam managed to remain fully operational. However, the pandemic is the primary factor explaining the decrease in volume.

Castelein: ‘We saw this drop in demand as a result of working from home and not commuting. So the demand for oil products and kerosene dropped considerably. We’ve also seen a decline in the transshipment of coal, iron and ores as a result of less steel production and less energy production in coal-fired power stations. Luckily, the loss of demand for containers wasn’t as bad, standing at 3.3 per cent. And we’ve seen a small increase in LNG, biomass and agri bulk.’

The throughput of dry bulk amounted to 30.8 million tonnes, 19 per cent less than in the first half of 2019. Dry bulk accounts for 14 per cent of throughput in the port of Rotterdam. Falling volumes were seen primarily in the throughput of iron ore and scrap (-22 per cent) and coal (-34 per cent) as demand for steel fell sharply as a result of production stoppages in the automotive industry and construction.

A low gas price meant that more gas and less coal was used for power production. In addition, favourable weather conditions meant that there was an increase in the available wind energy, reducing the need to switch to coal-fired power stations. There was a sharp increase in biomass (+109 per cent) due to the continued rise in co-firing in power stations.

Liquid bulk throughput amounted to 99.8 million tonnes. That is approximately 10 million tonnes less than in the first half of 2019, a fall of more than 9 per cent. Liquid bulk accounts for 46 per cent of throughput in Rotterdam. Throughput of mineral oil products fell sharply (-22 per cent). In the case of crude oil, the fall was only slight (-4 per cent) and LNG throughput actually increased slightly (+2.6 per cent). Throughput of other liquid bulk in the first half of the year matched the level of last year.

The fall in the mineral oil products category related mainly to fuel oil. The throughput of crude oil declined primarily because of falling demand. As a result, some large refineries were operating at less capacity than usual. The COVID-19 pandemic led to a further drop in the gas price, making it appealing to use LNG from the North Sea and Atlantic Ocean for power production in Europe.

Shipping companies cancelled up to twenty per cent of all their services in May and June. The decline in throughput was nevertheless less pronounced due to the increased call sizes of vessels calling at Rotterdam. The number of empty containers was considerably lower than in the same period last year because imports of containers from Asia have fallen while exports have actually risen.

Break bulk fell by 11 per cent in the first half year. RoRo throughput was 12 per cent lower. Most of the drop was at the beginning of the second quarter, when the lockdown was in place in most of Western Europe. Volumes increased again towards the end of the quarter.

Gross investments in the first half of 2020 amounted to € 136.4 million. The Port of Rotterdam Authority has deliberately chosen to continue investing in the Port Industrial Complex during the COVID-19 period. The most important investments for the first half of 2020 were the construction of the Theemsweg Route, the construction of the Container Exchange Route and the extension of Maasvlakte Plaza. The level of investment for the whole of 2020 is expected to be in line with last year (2019: € 338.3 million).

Investments are good for the economy and they can help it to recover faster. That is why the Port of Rotterdam Authority has reviewed the investment projects to see which of them can be brought forward. These are the projects that can accelerate economic recovery, working like a sort of starter motor to get the economy going again. Initiatives in this area will fall under the programme “Starter Motor”, which is to be carried out together with authorities and companies.

The programme cuts two ways: it accelerates forward-looking investments in growth and earning capacity while also accelerating the energy transition and efforts to make the economy more sustainable. Examples of Starter Motor projects are the construction of a hydrogen network, the roll-out of shore power and the construction of a heat roundabout.

There is considerable uncertainty about how long the recession will last and when recovery will begin. The recovery of the world economy depends very much on whether there will be a second wave of virus infections. And another factor is whether the EU and the UK will manage to conclude a post-Brexit trade agreement in the coming months.

A cautious recovery of the economy is expected in the rest of the year. As a result, volumes in the port will not decline further, but there will probably be no full recovery of volumes. The total throughput volume for the whole of 2020 is therefore currently expected to be significantly lower than in 2019.

Still, Castelein remains hopeful: ‘I’m convinced the port will overcome this crisis and that the future is bright.’