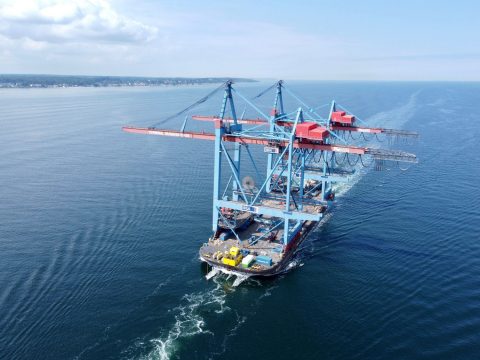 On Wednesday morning, the two large container cranes from Hamburg arrived at the HHLA TK Estonia terminal in the port of Muuga.

Riia Sillave, Managing Director of HHLA TK Estonia: “The additional cranes from Hamburg are a huge step towards expanding the handling capacity at our terminal. In future, we will no longer have three but five container gantry cranes to handle ships. It is another important milestone in the further development of our terminal into a key Baltic hub within the port network of HHLA.”

The cranes will be customized after arrival and are expected to commence operations by the end of the year.

Even before the transshipment, container gantry crane operators and technicians of HHLA TK Estonia were trained by their Hamburg-based colleagues so that they will be ready to begin operations once the cranes are set up.

The Belgian specialist Sarens was contracted to carry out the transshipment and transport of the container gantry cranes to Estonia.

The loading process itself was carried out with the help of a special transport platform which has 92 axles and 184 wheels, and the cranes were turned 180 degrees before the transshipment.