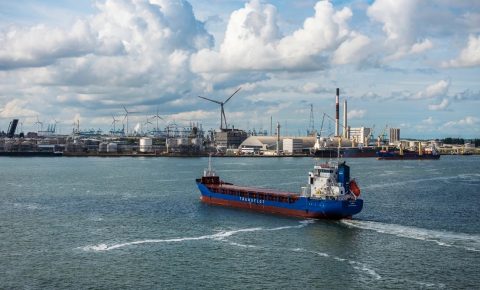 The Port of Antwerp’s breakbulk volumes for the first six months of 2021 have risen to the levels achieved in the first half of 2019. Following a period of adversity, breakbulk continued its growth during the period.

The throughput of iron and steel, the most important group of goods within this segment, grew by 37.8 percent due to a peak in the supply of steel.

The combined conventional breakbulk volume jumped by 41.2 percent compared to 2020, reaching 4.9 million tonnes, equaling the throughput of the first 6 months of 2019.

RoRo also performed well in 2021, increasing by 22 percent compared to the first half of 2020, reaching a total of 2.6 million tonnes, the Port of Antwerp informed in its report.

The total throughput in the Port of Antwerp rose by 5 percent compared to the same period in 2020, staying level with 2019 figures at a total of 120 million tonnes.

Despite the ongoing corona crisis, all goods flows recorded growth in the period under review, the port authority said.

Containers are the only cargo type that has grown continuously since 2014, increasing by 4.3 percent in the first half compared to 2020 and 3.9 percent compared to 2019 (in tonnes).

With an annual flow of goods of approximately 15 million tonnes, the United Kingdom is the third maritime trading partner for the port of Antwerp.

The start of Brexit at the beginning of this year presented major challenges due to more controls, longer transit times and higher costs. As a result, the flow of goods between the EU and the United Kingdom decreased.

In contrast, despite these difficult circumstances, the port of Antwerp recorded an 11.1 percent growth in total throughput with the UK and 12.1 percent with Ireland in the first half of the year compared to the first six months of 2020.

In preparation for Brexit, Port of Antwerp is fully committed to further expanding the short sea connections with the UK and Ireland in order to realize the modal shift from ferry to container transport. Five years after the Brexit referendum, the port of Antwerp is now connected to 12 British and Irish ports and we see that Irish importers and exporters are increasingly ignoring the land bridge across the UK and opting for a direct maritime connection.