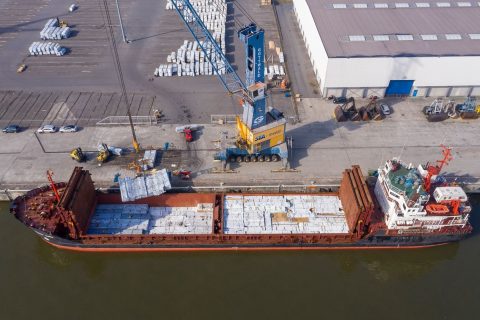 North Sea Port reported a drop in breakbulk transhipment volumes during the first half of the year that actually showed signs of partial recovery.

The increase meant the port handled 1.6 million tonnes more seaborne transhipment cargo in the first six months of this year compared to the same period in the ‘coronavirus year’ 2020.

Whereas last year the transhipment figures for the first half of the year were severely impacted by the pandemic, this year the port is seeing a partial recovery for the same period.

If this trend continues, half of last year’s losses will be recouped this year, before hopefully returning to the level of record year 2019 by the end of 2022, the statement reads.

Transhipment of dry bulk rose by 9.6 percent to 17.8 million tonnes, thanks to the growth in scrap metal, natural fertilisers, gypsum and cement.

For inland navigation, North Sea Port recorded a transhipment volume of 29 million tonnes in the first half of the year. This is an increase of 1.9 percent (535,000 tonnes) compared to 2020.