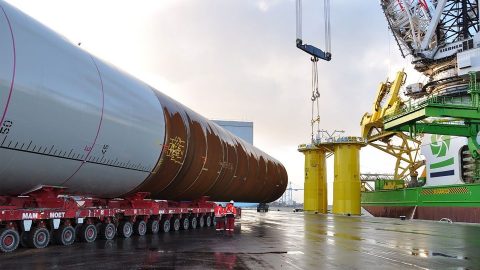 Port of Rotterdam has certainly put the pandemic behind it as its breakbulk throughput figures for the year so far have passed throughput in 2019, which was a record year. The port has reported an overall jump of 14.7 percent in breakbulk cargo throughput earlier this year and this upwards trajectory is continuing.

The port specialises in four types of breakbulk cargo, these being steel, forest products, non-ferrous and heavy-lift project cargo. During 2020, the port authority reported a breakbulk throughput of 6 million tonnes. The positive was that despite the challenges caused by the Covid-19 pandemic, the port remained fully operational during the year and companies active in the port of Rotterdam adapted extremely fast to the new situation.

During the first six months of 2021 there have been major signs of recovery with the port reporting a 14.7 percent increase in breakbulk cargo. The port handled 3.3 million tons during the period which compares to 2.8 million tons in the corresponding six months in 2020.

Speaking during the Project Cargo Summit, the fifth edition of the event in Rotterdam, Danny Levenswaard, director breakbulk at Port of Rotterdam, noted that the port has been able to take advantage of its diversity and unique features. “We are Europe’s most versatile port with all sectors well represented, whether it comes to offshore wind, RoRo cargo, heavy-lift project cargo, it is all here in the port, and there is nothing we can’t handle,” Levenswaard said. He added the port can ship any type of breakbulk cargo within 24 hours to all the major industrial areas within Europe.

As of March, breakbulk volumes in 2021 have outpaced 2020 figures, business manager breakbulk & offshore industry Twan Romeijn told Project Cargo Journal. The uptick was especially noticeable in June when a significant amount of steel and non-ferrous materials were handled at the port. Large volumes within these segments entered the port area either for storage or hinterland transportation for industries such as automotive. The high figures for June are present due to the fact that the normal volumes continued and that additional cargo was discharged from regions such as Russia, Scandinavia and Canada, Romeijn adds.

Furthermore, port companies have resumed investing in assets and infrastructure again, which is a good sign for economic recovery. In terms of recovery of the port’s throughput, it was helped mainly by the fact that more project cargo is coming through the port, as a number of projects are being started or continued again. “Also steel cargo and non-ferrous cargo are doing well, and can be seen as the main drivers of the growth for the first half of the year,” Levenswaard said.

The third quarter figures are also continuing the trend of the first six months, Romeijn told Project Cargo Journal. Currently, total breakbulk throughput volumes up to the end of September have reached above 5 million tons. This is above the 4.17 million tons reported in the corresponding period of 2020 and 4.93 million reported in 2019, which, as mentioned, was a record year.

The increase is mainly due to the high volumes of non-ferrous and steel being handled during the third quarter at the port. These segments are closely followed by the forest products and project cargo that is catching up as more projects ramp up. For some segments the crisis could well be over, while some other segments will have to wait a bit still. However, Levenswaard stressed that, should the circumstances remain the port could see a return to pre-Covid throughput levels.

Twan Romeijn adds: “As Rotterdam we are very pleased with these results, however more important are the developments the companies are realising. Companies are investing in new equipment, sustainable solutions and expansions to even further increase their service levels. This corresponds with our proposition Bigger. Better. Breakbulk and our ambition to become the Breakbulk hub of Europe”, We want to realise a breakbulk cluster in which there are no limits, where we are straightforward and always one-step ahead to serve the breakbulk industry in the best possible way.