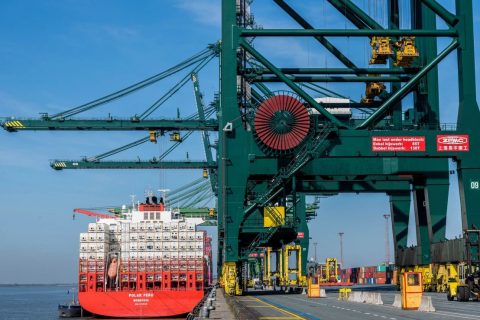 Breakbulk throughput volumes at the Port of Antwerp have shown a jump during the first nine months of the year. Breakbulk has grown by 62.7 percent reaching 8.3 million tonnes during the period that came up level with 2019 figures.

The port reported a total throughput of 179.1 million tons, 4.9 percent up compared to the first nine months of 2020, levelling the figures reported in January-September period of 2019.

The breakbulk throughput rise was helped by the strong growth in steel trade which was up 65.9 percent. September was the best month of the year for the conventional breakbulk segment and even the best month since June 2011. RoRo is up 18.2 percent compared to the same period in 2020. In addition to the increased handling of commercial vehicles, wood and building materials are also notable risers, the port of Antwerp said.

Despite the still persevering operational challenges, all goods flows are recording growth, the port said. Special mention was given to sea going vessels with 10,608 of these vessels calling at Antwerp, representing a rise of 3.6 percent compared to the same period in 2020.

Annick De Ridder, port alderwoman said, “Despite continuing operational challenges such as disrupted container liner shipping, pressure on the terminals due to the pandemic and delays, we continue to record growth in all segments.”