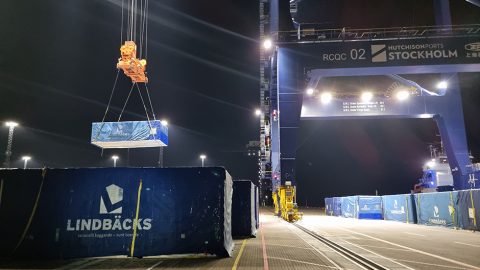 The load comprised 70 modular construction units from Lindbäcks Bygg, and there could be more loads in the future. “A great advantage of Stockholm Norvik is its proximity to our construction site, which is only eight kilometres from the port,” said Sofia Franzén, logistics developer at Lindbäcks Bygg.

Hutchison Ports operates the container terminal at Stockholm Norvik Port and believes there are advantages to handling project loads in addition to container transport. The demand for project loads is increasing as the Stockholm region grows, and the port is perfectly placed to meet this demand.

Compared to other Baltic Sea ports, the short, open approach lanes to Stockholm Norvik Port make transport more cost effective. Vessels with project cargo do not need tugboats and pilotage costs can be kept to a minimum. The modular construction units are unwieldy oversize loads and the costs of transporting the units through Sweden individually by road are high. Extra-wide vehicles also need special permits.