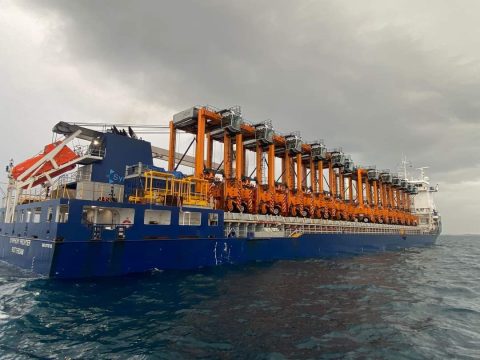 A total of twelve Kalmar straddle carriers have recently found their way to the Medcenter Container Terminal (MCT) in the Italian port of Gioia Tauro. The units have been delivered onboard Symphony Shipping’s multipurpose vessel, Symphony Provider.

The 12 diesel-electric straddle carriers for Medcenter Container Terminal (MCT), which is owned and operated by Terminal Investment Limited (TIL), have been ordered in July 2021. Symphony Provider, a 10,500-dwt multipurpose vessel loaded the units in the Polish port of Gdynia and delivered them to the port of Gioia Tauro on December 27.

The 2017-build vessel with and overall length of 124.70 metres has since departed the port of Goia Tauro and is currently moored at the Italian port of Piombino, according to the vessel’s AIS data.

Located in the southern Italian port of Gioia Tauro, MCT is a megaport able to handle the largest container vessels deployed on Asia-Mediterranean routes. The terminal has handled more than 56 million TEUs since it opened in September 1995.