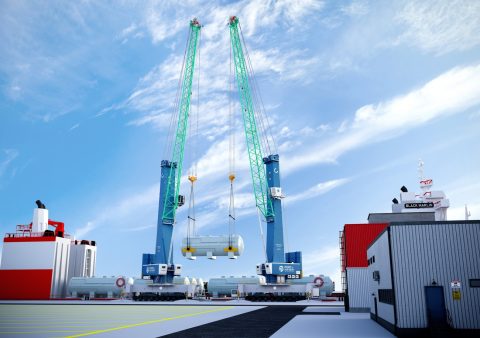 The Port of San Diego has placed an order with Konecranes for two Generation 6 Konecranes Gotwald Mobile Harbor Cranes for the Tenth Avenue Marine Terminal (TAMT) in Southern California. The port aims to decarbonise its operations and the two mobile cranes will help in this quest once in operation mid-2023. It will also provide a needed boost in the project cargo handling capacity as demand for heavy project cargo is expected.

In operation for 60 years, the Port of San Diego protects and manages San Diego Bay and 34 miles of waterfront. The Port provides services that carefully take into account clean air, pollution prevention, and energy efficiency under its Maritime Clean Air Strategy, a policy document that aims to balance community health improvements through cleaner air while also supporting efficient and modern maritime businesses and jobs.

An important hub for regional trade, the Port of San Diego hosts two cargo terminals. One of these, omni-cargo terminal TAMT, needs new harbor equipment with the capacity to handle an expected increase in heavy project cargo and containers while producing no local exhaust emissions.

“Konecranes has provided us with a unique solution that uses proven battery technology in a new way. Not only do these cranes have the power to lift the heaviest loads, they are also all-electric, emitting no tailpipe emissions at all with much less noise. This gives us a competitive advantage in the region and it’s great news for our customers, community and the environment as we work towards our goal of zero emissions by 2030,” says chairman Dan Malcolm, Port of San Diego Board of Port Commissioners.

These Generation 6 Konecranes Gottwald Mobile Harbor Cranes are equipped with an external power supply. Thanks to their electrical design concept, efficiency increases when they’re connected to the harbor mains. Instead of onboard diesel engines, the cranes are equipped with battery packs. They allow extensive traveling time when unplugged from the harbor mains. In addition, short-term load handling is possible with the battery drive in case of an emergency, such as an unexpected power loss. The battery takes its charge from the mains but also collects energy from braking and lowering movements for later use. A similar battery-driven crane has been previously tested in Sweden.

The two new all-electric cranes at the Port will be Konecranes Gottwald ESP.9 Mobile Harbor Cranes, each with a working radius of up to 59 metres and a lifting capacity of 200 tons. The cranes can be used together, doubling capacity to 400 tons thanks to the innovative Tandem Lift Assistant, a Smart Feature which helps synchronise the cranes during dual lifting controlled by just one operator, making the most of the full capacity of both cranes. This will improve the performance and safety of the cranes when moving heavy project cargo in the Port of San Diego.