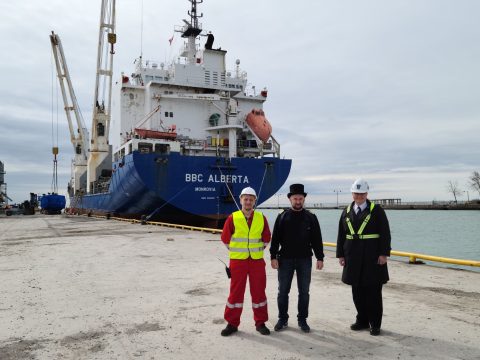 Shipping season in the Port of Oshawa, Ontario, Canada was kicked off by the 2010-build BBC Alberta that arrived to the port over the past weekend. The vessel arrived from Charleston, South Carolina with a load of general cargo.

Stevedore QSL unloaded the cargo over the weekend, which will be delivered to its final destination at the Scarborough Subway Project in the coming week. The Port of Oshawa is a strategic gateway to the Greater Toronto Area through Durham Region – especially in delivering the materials needed for construction and infrastructure projects such as new transit lines.

Domestic cement carrier, NACC Quebec, followed closely behind coming in from Port-Daniel in Gaspé, Quebec. The NovaAlgoma Laker pulled into dock 15 hrs later with a load cement for McInnis.

In 2021, HOPA saw 11.2 million mt of cargo through Hamilton and Oshawa’s ports, up 9 per cent from the previous year. Though Oshawa saw a slight decrease from its all-time record high in 2020; the port did see increases in fertiliser and finished steel; and in the coming years, Oshawa’s port is poised for even greater growth.

In 2022, HOPA Ports is planning for $30 million in construction projects across its network in Oshawa, Hamilton, and Niagara. HOPA plans to build on Oshawa’s current cargo levels by upgrading its port facilities and infrastructure; namely, increasing capacity for agricultural cargoes. “By making the right infrastructure investments, we’re able to improve the fluidity of the supply chains we support, and expand Canada’s trade capacity,” said HOPA President & CEO, Ian Hamilton.