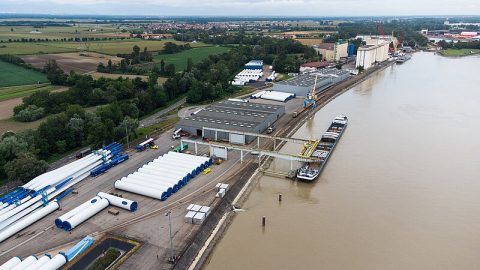 Société d’Economie Mixte à Opération Unique (SEMOP), a joint venture by Rhenus Group, SMO and Banque des Territoires is lining up new investment in the course of 2022. SEMOP, a company operated by CFNR Transport, a unit of the logistics provider Rhenus Group, will acquire six wagons for the rail transfer within the industrial port zone and will renovate its administrative building.

Since 1 April 2021, CFNR Transport SAS, has been managing the SEMOP (operating company) of the Rhine Port of Colmar Neuf-Brisach under a 30-year deal. After one year of operation of the industrial port zone, a first assessment can be made and some projects announced.

Jean-Marc Thomas, managing director of CFNR Transport SAS and of the SEMOP, says, “The new governance has been implemented without difficulty and allows us to be confident about the future. As part of the planned investment programme, we have already set up an external storage area of 8,500 square meters and deployed a new IT management system.”

Port traffic, consisting mainly of metallurgical products, minerals, construction materials and foodstuffs, has remained stable over the past year. In the course of 2022, the SEMOP will acquire six wagons for the rail transfer within the industrial port zone and will renovate its administrative building.

In regards to the development of the EcoRhena ZAC business park, along the Alsace canal, the prefectural decree has been published and the first analyses and studies will begin shortly. Together with the local authorities and citizens’ associations, the economic zone will be developed by the SEMOP in order to offer investors pieces of land alongside the quay for commercial and logistics activities.

The Rhine Port of Colmar/Neuf-Brisach is the seventh largest river port in France. Each year, it handles 1.6 million tonnes of goods and more than 13,000 TEUs. A multimodal platform equipped with 12,000 square metres of its own warehouse space, it receives trains from the French national railway network (RFN) and hauls them from Volgelsheim station to Marckolsheim on its own tracks and loads and unloads barges with the option of subsequently handling delivery of the goods by rail thanks to its own 30 wagons.