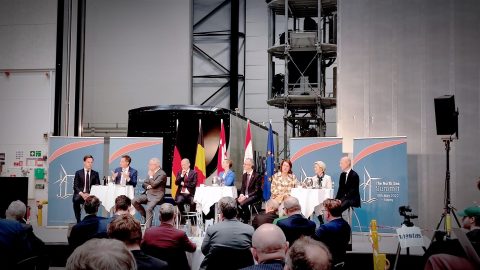 European leaders could agree on an ambitious goal of increasing the offshore wind capacity in the North Sea to at least 150 gigawatts by 2050. At the European Leaders’s Summit with the president of the European Commission, Ursula von der Leyen and the German Chancellor, Olaf Scholz, in attendance, leaders from Denmark, Germany, the Netherlands and Belgium are expected to sign a declaration that will start a massive expansion of offshore wind in the North Sea.

The EU has ambitious goals for the phase-out of fossil fuels, and the need to accelerate the phase-out has only gotten bigger after the Russian invasion of Ukraine. “This underlines, what we have already been saying. Port Esbjerg will have a lot to do,” says CEO of Port Esbjerg, Dennis Jul Pedersen.

Esbjerg has one of the world’s leading ports within offshore wind and the whole value chain is present at the port, which has been involved in the shipping of more than 4.000 offshore windmills with an accumulated capacity of more than 22 GW. But even though the port and the rest of the value chain has been preparing for the growing demand of offshore wind, the ambitious goals still require much more infrastructure all over Europe – and especially there is a lack of sufficient port infrastructure.

”We simply need more space. In Esbjerg, we are expanding the port area, but it takes time to build the necessary infrastructure. Therefore, it is essential that the ambitious goals are paired with a concrete plan for, how to upgrade the port infrastructure of Europe, while giving the industry the necessary flexibility in tenders and more efficient project processing allowing the industry to meet the growing demand as effectively as possible,” says Dennis Jul Pedersen.

If the ambitious targets are to be reached and the potential in the North Sea harnessed, we have to innovate. Denmark is ahead of the curve with the plans for establishing so-called energy islands that work as base for offshore wind while allowing for modern Power-to-X-solutions. Furthermore, the so-called Esbjerg-declaration is expected to hold concrete initiatives, that will smoothen out the project review process.

”With the energy islands we are reaching an even bigger scale in terms of energy production, so it could potentially have a big effect on European energy supply. The Danish energy islands will be a leading example of modern production of sustainable energy, so it makes sense that Europe is looking to Denmark to find solutions. At the same time, it is very positive that there is an openness to looking at more flexible tender and review processes,” says Dennis Jul Pedersen.

The Danish Prime Minister will host the President of the European Commission, Ursula von der Leyen; the German Chancellor, Olaf Scholz; the Prime Minister of the Netherlands, Mark Rutte and the Prime Minister of Belgium, Alexander De Croo. The whole delegation will be showed around the port and will visit some of the port’s companies that specialise in offshore wind before signing the Esbjerg-declaration.

The European Commission has presented the REPowerEU Plan, its response to the hardships and global energy market disruption caused by Russia’s invasion of Ukraine.

EU is planning massive scaling-up and speeding-up of renewable energy in power generation, industry, buildings and transport as it would accelerate its independence, give a boost to the green transition, and reduce prices over time. The Commission proposes to increase the headline 2030 target for renewables from 40 percent to 45 percent under the Fit for 55 package.

Setting this overall increased ambition will create the framework for other initiatives, which, among others include a target of 10 million tonnes of domestic renewable hydrogen production and 10 million tonnes of imports by 2030, to replace natural gas, coal and oil in hard-to-decarbonise industries and transport sectors. To accelerate the hydrogen market increased sub-targets for specific sectors would need to be agreed by the co-legislators.

The Commission is also publishing two Delegated Acts on the definition and production of renewable hydrogen to ensure that production leads to net decarbonisation. To accelerate hydrogen projects, additional funding of €200 million is set aside for research, and the Commission commits to complete the assessment of the first Important Projects of Common European Interest by the summer.