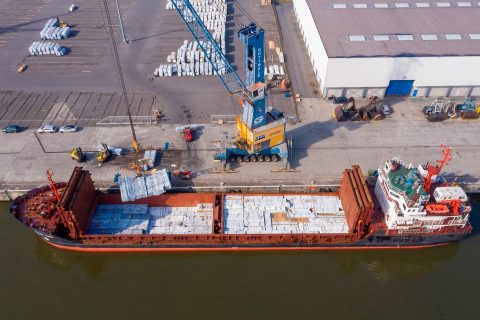 Ports are a major enabler of the energy transition and a very important link in the supply chain for the offshore wind industry. North Sea Port that spans more than 60 kilometres across two countries, Belgium and the Netherlands, is one of the multimodal hubs catering to this industry.

Because of its location at the North Sea, the port is directly accessible by sea-going vessels, benefitting global trade. It is also part of the Rhine-Alps, North Sea-Mediterranean, and North Sea-Baltic transport corridors, which ensure that goods can be delivered quickly and efficiently by rail, road, and/or inland shipping to their final destination.

Making sure that the port is available with its capacity and expertise at all times, to its clients is of utmost importance for the port. According to Marcel Pater, commercial manager at North Sea Port, logistics supply chains have been distrubed in many ways and the incoming demand from the offshore wind industry requires the port to act quickly in order to ensure availability to clients.

“We are expecting a big increase in demand for project cargo from 2024-2025. We see a tremendous increase in the weight of the modules that have to be transshipped, so we have to prepare ourselves on the bearing capacity of the quay walls and the quay wall length and the terminal capacity behind it,” Pater told Project Cargo Journal during the Breakbulk Europe event in Rotterdam.

At the start of May, the port kicked off construction at the new 800-metre-long quay at Quarleshaven in East Vlissingen. With this €40 million investment, North Sea Port is improving access to the Sloe area.

A consortium made up of Werkendam-based hydraulic engineers Hakkers and De Klerk will be responsible for the construction of the new quay, which will be ready by late 2024, right in time when Pater said the demand is expected to rise. The total length of the quay on the south side of Quarleshaven will be 1,200 metres.

Various types of seagoing vessels will be able to moor at the new quay, for example project cargo vessels, heavy-lift vessels, bulk carriers, fruit carriers and tankers with a draught of up to 12.5 metres, as well as inland vessels.

He further noted that the geopolitical challenges have also influenced the developments in the port area. He noted that the decrease of oil and gas supplies from Russia have resulted in energy transition picking up pace, and hydrogen is a major area of investment.

As Pater was mentioning the hydrogen economy, his colleagues from the North Sea Port put pen to paper on a deal with Gasunie and Fluxys. The two companies have joined forces to connect the national hydrogen networks in the Netherlands and Belgium in the North Sea Port area on the Dutch-Belgian border. The link will provide hydrogen to the companies in the 60 kilometre cross-border port area: from Vlissingen and Terneuzen in the Netherlands to Ghent in Belgium.

The cross-border industry cluster in North Sea Port is the largest hydrogen hub in the Benelux. 580,000 tons of hydrogen are produced and consumed by companies there every year. The demand for hydrogen in the port area will double by 2050, by which time it will be fully sustainable. The cross-border network will bring together supply and demand on a large scale, driving forward the development of the hydrogen market.