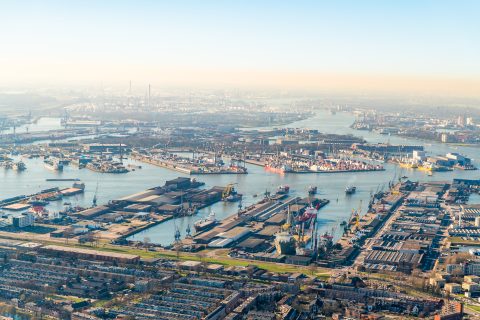 It is bringing a significant increase in volume for products related to the offshore wind industry in the form of monopiles, blades, transition pieces and tower sections. The port of Rotterdam saw record figures in 2021, with an overall growth in breakbulk throughput of 15 percent, reaching 6.9 million tonnes. The first half of 2022 followed the trend with the volumes reaching 3.9 million tonnes, jumping 17.7 percent.

Romeijn notes that the increase has been driven by non-ferrous products, steel as well as heavy-lift and project cargo and the port expects the upwards trajectory to continue throughout the year.

But the port has certainly seen some disruptions over the last months, some from the ongoing Covid-related supply chain issues, others due to the ongoing war in Ukraine. While Romeijn notes that the supply chains have adapted to the new situation and cargo that has previously been imported from the affected regions are being sourced from elsewhere, export and import sanctions imposed on Russia have the potential to cause an overload.

In a whitepaper recently published by the Port of Rotterdam, Bart-Luc Olde Hanter, Head of Business Development at Rhenus Logistics says, “A lot of cargo is currently at a standstill. At our deep sea heavy lift and breakbulk terminal at the Maasvlakte alone, there are several tens of thousands of tonnes of steel involved. Other terminals are facing the same problems,” Olde Hanter says. He estimates that in Rotterdam alone hundreds of thousands of tonnes of aluminium and steel are involved. “And if you have a lot of cargo, there is automatically less terminal area available to carry out other operations,” Olde Hanter notes with concern.

“We are seeing a huge increase in breakbulk cargo for the oil and gas industry,” added Robert Jan van der Voort, Chartering Manager at Cargow. “The number of requests and shipments in oil and gas as well as in related products is skyrocketing. Cargoes that come in on multipurpose vessels, or on container ships all have to go to Norway. Largely for the replacement market, because the high prices are making it interesting to drill for oil again. But also, to expand existing capacities.”

But the rising prices are also putting renewable energy in even more focus, and Romeijn added that it certainly is high on the agenda. Offshore wind farms are booming. It is an opportunity that the breakbulk sector is seizing with both hands. But there are also opportunities for parks that have already been completed, especially when it comes to shipping replacement parts, and carrying out decommissioning activities, which is becoming an industry in its own right.

It is also obvious for Olde Hanter that the energy transition will pick up even more pace in Rotterdam, with projects being picked up and developed even more quickly to meet CO2 reduction targets.

Port of Rotterdam developing to meet the needs

With more projects coming in, and the energy transition picking up pace, it is fair to say that the Port Authority has to work fast to ensure it is ready to respond to the demands. Romeijn pointed to the recently constructed Sif terminal that saw the quay wall extended by 200 metres, leading to a total length of 600 metres and a retaining height of 30 metres.

The depth in combination with the height makes this quayside unique, as it is the deepest and strongest quay side of Rotterdam, the Netherlands. This goes in line with the company’s goal to accommodate the ever-increasing size of the components it has to produce for various offshore wind farms. The facility is currently busy supplying the Hollandse Kust Zuid wind farm being constructed some 18 kilometres from the coast between Den Haag en Zandvoort.

Space is still tight at the Port of Rotterdam and while new land is being constructed it is a matter of picking and choosing the right spots for breakbulk and offshore industry. “We are doing our best, but as you know Rotterdam is quite full. We are constructing new land, also related to other industries, but being responsible for offshore and breakbulk industry, I am trying to pick out for these industries as well. It has to be the right investment, in the right place,” says Romeijn.

“Also, the terminals that are already present in the port of Rotterdam, we are trying to develop them, upgrade them so they can also increase their capacity from that perspective so we are always working on further improving the area,” he added, stressing that communication is key towards making sure that the Port of Rotterdam is ready for the future. He further noted that there are new developments currently taking place in the Waal/Eemshaven port area for C. Steinweg where a former container terminal is being dedicated to breakbulk (pier 6). The port authority is also working together with Metaal Transport to expand the capacity for handling of steel and non-ferrous products.

Looking at the energy transition projects taking place in the Port of Rotterdam, Shell has taken the final investment decision to build Europe’s largest green hydrogen plant on Maasvlakte 2. The port of Rotterdam and the cluster of companies operating in the port area can supply Northwestern Europe with 4.6 million tonnes of hydrogen annually by 2030.

Various stakeholders in the port of Rotterdam are working on import terminals for hydrogen: Gasunie, HES International (HES) and Vopak will be working together to develop an import terminal for green ammonia as a hydrogen carrier. Air Products and Gunvor Petroleum Rotterdam (GPR), a subsidiary of Gunvor Group (Gunvor) have signed a joint development agreement for an import terminal in Rotterdam.

All this will help the authority achieve its goal of the Port of Rotterdam becoming a CO2-neutral port in 2050, and warrant more project cargo movement in the area in relation to these projects.