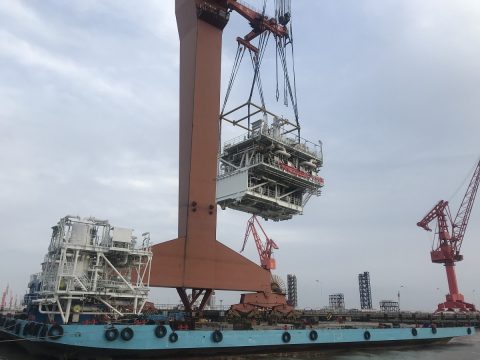 How Logistics Plus moved 3 modules in China from 9,000km away

Amidst the chaos of the coronavirus, freight forwarder Logistics Plus has managed the complete delivery of three modules for an FRSU-project in China, the heaviest weighing 425mt. To workaround travel and quarantine restrictions, the company used video and WeChat, managing the transport from some 9,000 kilometres away.

Logistics Plus was contracted by Wärtsilä Gas Solutions to oversee the delivery of three regasification modules for a Floating LNG Regasification and Storage Unit (FRSU). The modules were destined for a new 294-metre FRSU/LNG vessel built by Chinese shipyard Hudong-Zhonghua for Dynagas.

The three regasification units were built at Cosco Offshore yard in Qidong, some 40 kilometres away from Hudong-Zhonghua’s shipyard on the Changxing Island near Shanghai. Logistics Plus was responsible for the technical management of the project as well as the transportation from one site to the other.

Our initial plan went overboard quickly due to the Covid-19 outbreak.

Logistics Plus’ scope of work started in August. “Initially these 3 modules were planned to be shipped immediately after the Chinese New Year holiday break, but that plan went overboard quickly due to the outbreak of Covid-19”, says project manager Frederik Geirnaert of Logistics Plus.

As of March, workers that were greenlit by the Chinese government could slowly return to the yards again to finish the modules and prepare transportation. But mid-March, Hudong-Zhonghua announced the vessel had to be launched no later than March 30th, meaning the modules had to arrive and be installed March 27th at the latest.

The new timing represented a huge challenge for Logistics Plus. “Usually I would fly out to China and physically attend the operation but by the time the date was set, foreigners arriving in China were required to stay in quarantine for 14 days before being able to move in China”, Geirnaert says. That meant he would not be able to make it to the site in time.

This was especially inconvenient due to the complexity of the project. Because the modules had to be lifted straight from the self-propelled deck barge onto the FSRU they had to be discharged in a certain direction, but they could not be loaded in that direction at the Cosco Offshore facility. A solution was found in the end by having the barge berth at a 90º angle in Hudong-Zhonghua. This was only one of the many technical challenges that needed to be solved and of which Geirnaert had the most comprehensive understanding of all involved.

Stuck at home in Belgium, where the coronavirus had just arrived and began causing chaos, Geirnaert and his team found a solution to the conundrum.

“We had hired a marine surveyor to carry out all the necessary checks and he agreed to keep me posted using WeChat. That is a Chinese version of Whatsapp and Facebook combined and a very powerful app. In China it nowadays is far more popular and faster than e-mail, which the Chinese actually consider to be a bit of an outdated medium”, Geirnaert explains.

Following government guidelines, Geirnaert worked from his home in Belgium during the load-out operation and sat behind his computer from 3.00 in the morning to 10.00 in the evening, receiving updates minute by minute.

“Because WeChat allows you to easily send photos and documents and live stream video, it actually worked pretty well. Due to HQSE regulations at Cosco Offshore we had to weld additional lifting eyes to the load spreading beams that would support the units and despite working from such distance, we managed to identify the problem and solve it the same day”, he says.

Geirnaert used the same method to help with the offloading of the units at Hudong-Zhonghua’s yard. Using video streaming, he was, for example, able to see that the heaviest module had been rigged incorrectly.

“Because of its off-centred centre of gravity, that module had an auxiliary hook with slings added to the lifting eyes on the heavy side. But the foreman in charge had not read the direction on the rigging plan correctly, so this auxiliary hook was rigged to the lighter side of the cargo. It is exactly for these kinds of human oversight that invariably happen on such projects that I prefer to be on-site”, Geirnaert explains. “But this time I managed to catch it from 9,000 kilometres away.”

Despite the travel and quarantine measures that are still in effect, Hudong-Zhonghua was able to weld the regasification units onto the FRSU as they were discharged on March 27th and launched the vessel in time on March 30th. “A big achievement”, Geirnaert says, “and I congratulate them on it, as it is the first FSRU ever built in China.” 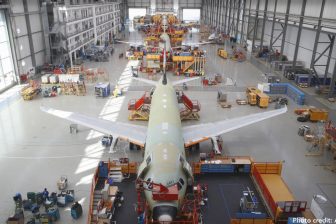 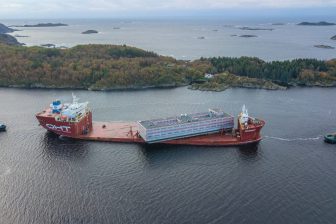