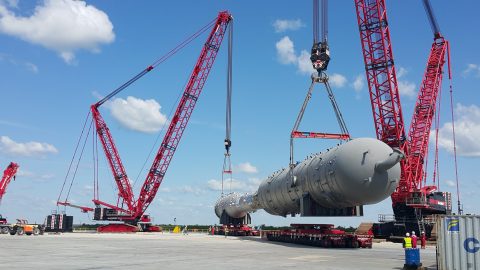 The Russian market for super heavy cargo is expected to grow by 2 to 4% annually in the next few years. In addition to the domestic power industry, the development of hydrocarbon reserves in Northern Russia may provide impetus as well, say analysts of the Russian Ministry of Transport.

Despite the Covid-19 pandemic, the Russian power and energy industry are resuming business activities in the Far East and Northern parts of the country.

Since the recent lifting of the majority of quarantine measures, the construction of several high-power energy facilities and the development of local hydrocarbon reserves have picked up again. That, in turn, has already led to increased demand for the supply of parts and other oversized equipment and machinery.

Nipigaz, a Russian forwarder specialising in heavy and oversized cargo, recently delivered an 831-tonne and 88-metre long methane recovery column for the fourth stage of the Amur Gaz Processing Plant owned by Gazprom Refining Blagoveshchensk, a subsidiary of Gazprom and Nipigaz.

The first three phases of this project were completed in 2017 to 2019. According to Gazprom Refining, the official commissioning of the plant is scheduled for 2025.

The plant is located close to the city of Svobodny of the Russian Amur Region in the Far East and will specialize in natural gas deliveries to China as part of the Power of Siberia project – a natural gas pipeline under construction in Eastern Siberia to transport Yakutia’s gas to Primorsky Krai and Far East countries. The gas major also said the plant will be the largest of its kind in Russia and the second-largest in the world, with a total design capacity of 42 billion m3 of gas per year.

Meanwhile in Russian Siberia, the construction of the large-scale Russian Irkutsk Hydroelectric Power Station was recently completed. For this project, which is part of the En+ Group, three super heavy hydrogenerators had to be transported.

The generators were delivered by their producer NPO Elsib, one of Russia’s major machinery producers, which specializes in the production of electric generators and large machines for metallurgy. Each hydrogenerator weighed 833 tonnes. The cargo was moved by truck over a distance of about 1,850 kilometres from Novosibirsk to Irkutsk.

European companies are set to benefit from Russia’s increased demand for super-heavy transport as well. Mammoet recently announced it has won its biggest project to date, the transport and installation contract for the USD 21 billion Arctic LNG 2 project in Northern Russia.

This project entails the transport and installation of 42 modules and other pieces of heavy equipment. The project will require around 2,000 SPMT axles, several Mega Jack lifting systems, a crane fleet spearheaded by a CC8800-1 crane and around 120 workers at peak times.

Mammoet was recently also involved in the transportation of a 955-tonne and USD 10 million pressure vessel for Russian gold miner Polymetal. The pressure vessel was made by Coe Engineering in Belgium, moved to the port of Antwerp by Mammoet and then shipped to Russia by SAL Heavy Lift.

Currently, the share of superheavy cargo in Russia’s total cargo volume is estimated to be about 2%. However, according to analysts’ predictions, these figures may grow significantly this year already.