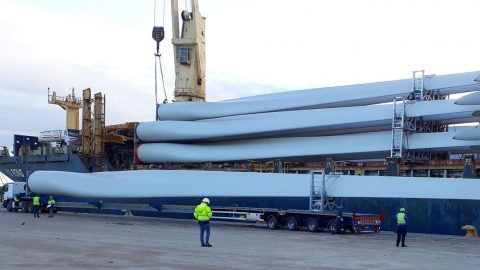 Contracted by global logistics company Drewes Group, Mammoet’s scope for these projects included the receiving, port handling and transport to laydown area of components for 127 wind turbines – the inventory for all three sites. The components, such as nacelles, hubs and blades, ranging in weight up to 105 tons, and with a length of up to 63 metres, were received at the ports of Coega (Port of Ngqura) and Saldanha, and then transported to temporary laydown areas nearby.

Pre-arranged escort vehicles and flagmen accompanied the transport combinations as required by the port authorities. A high level of logistical precision ensured that tower sections, blades and nacelles reached their respective sites as scheduled.

Roggeveld Wind Farm, developed by Building Energy, is a 147MW site, located approximately 20km north of Matjiesfontein, in the Karoo, on the boundary between the Western and Northern Cape. It will comprise 47 Acciona AW125/3150 and AW125/3000 turbines, generating 613 GWh of green energy yearly.

“We are proud of our part in all three wind farm developments in South Africa, and thereby supporting the country’s commitment to meet both its future energy needs and its climate change objectives. We are always ready to support our customers with our all-encompassing services, providing expertise of managing complex logistics for wind farm projects.” commented Henry Viljoen, manager sales, Mammoet Southern Africa.

Once in operation, the wind farms are expected to generate over 1000 GWh of clean, green power for South Africa, reducing its reliance on fossil fuels.