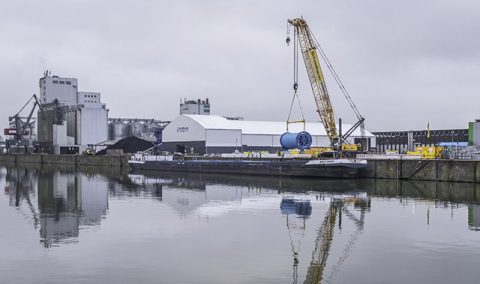 The cable drums are produced by the Milan-based company Prysmian Group on behalf of TenneT. The production of the cables in Gron near Paris, which are transported by ship to the storage area in Regensburg, has been running since autumn 2021. With the help of a 300-ton crawler crane, the huge cable drums are unloaded from the barge and, in the next step, stored on the 25,000 m² site. In addition, Schmidbauer provides a 2000 m² warehouse to store the cable sleeves and terminations professionally and safely.

To lift the heavy loads, Schmidbuer is using a Liebherr LR 1300.1 SX crawler crane with a 300 ton lift capacity. Thanks to its many innovative assistance systems, the crawler crane increases safety in use and makes lifting easier. Its special hydraulically liftable cab is ideally designed to carry out ship loading operations. In addition, it has an overdrive to cover the routes on the camp site at higher speeds. A six ton telehandler P72.10 from Merlo and a three ton stacker EPX30i from Clark are also used.

As soon as the cable drums are dispatched to their place of use, several special transporters are loaded weekly and sent to the construction site. Construction of the SuedOstLink is expected to begin in 2024.

“In the end, we were able to prevail in a tendering process that lasted more than two years,” says Werner Schmidbauer, managing director of the Schmidbauer Group.

The SuedOstLink project being developed by TenneT is an integral part of the energy transition and will ensure that the electricity produced from renewable sources in the windy north and north-east of Germany can be transported south by means of high voltage direct current transmission (HVDC).

Project 5 of the SuedOstLink is around 540 kilometres long and stretches from Wolmirstedt near Magdeburg in Saxony-Anhalt to the Isar network connection point near Landshut in Bavaria. In Bavaria, TenneT is planning and building the line from Münchenreuth, in the district of Hof, to the grid connection point.