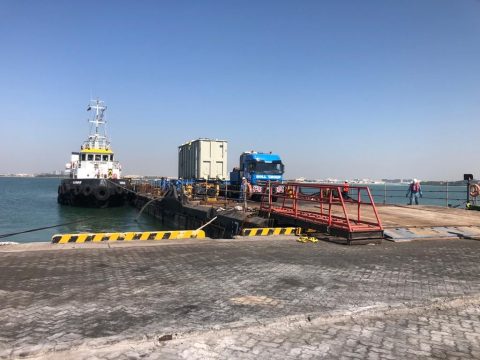 Roll Group has completed the delivery of a 329-ton transformer to a solar plant project in Abu Dhabi. The cargo was received directly under hook at Mina Zayed Port, rolled onto a barge and sailed to Mussafah port for roll off and transport to the site.

During transportation Roll Group used 4-file 20 axle conventional trailer. In order to move the transformer advanced preparations such as a bypass road, removal of traffic sign boards, construction of temporary bridges and a detour at E11 highway made this project a huge success!

Roll Group is also contracted to transport two further transformers for the project.

Currently under development in the United Arab Emirates is the Al Dhafra Solar Photovoltaic (PV) Independent Power Producer (IPP) project. The Al Dhafra project will be 60 percent owned by TAQA (Abu Dhabi National Energy Company) and Masdar, while the remaining 40 percent will be owned by EDF and JinkoPower.

The record-breaking project, located approximately 35 kilometers from Abu Dhabi city, will have a capacity of two gigawatts and supply power to the plant’s off-taker, Emirates Water and Electricity Company (EWEC). Once operational, the Al Dhafra Solar PV IPP will be the world’s largest single-site solar power plant, using approximately 3.5 million solar panels to generate enough electricity for approximately 160,000 homes across the UAE. It will mitigate 2.4 million tonnes of carbon dioxide annually.

The project is expected to be completed in 2022.