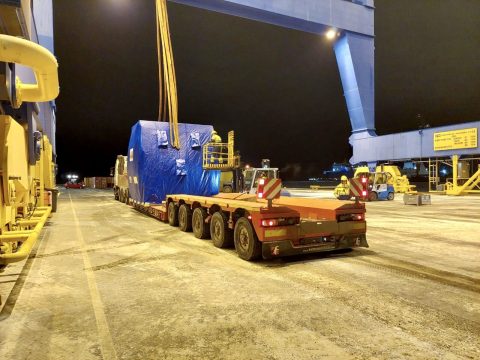 DAKO takes a 62-ton generator across the Atlantic

DAKO Worldwide Transport has recently been tasked with moving a replacement generator from Finland to a power plant in Talnique in El Salvador. The operation required detailed planning and a number of transshipments to get the 62-ton unit to its final destination.

On the first leg, DAKO moved the generator on Finnlines ro-ro service from Helsinki to Belgium. There the unit was loaded as breakbulk on Maersk’s container vessel Polar Mexico heading to the Manzanillo International Terminal in Panama. Following another transshipment, DAKO enlisted the services of a feeder vessel Hansa Salzburg to move the generator to the Puerto Barrios in Guatemala.

Once the shipping legs of the journey have been completed, DAKO Worldwide Transport partnered up with Daco Heavy Lift for the final leg of the journey to Talnique, in El Salvador. The heavy hauler received the 62-ton generator under hook in the port of Puerto Barrios, and after bracing six bridges, crossing the Salvadorian border, and completing a 400 kilometre journey delivered the generator to the site after a week in transit.

Inversiones Energéticas (INE) commissioned the Talnique power plant in December 2006 with three Wärtsilä generators with a nominal gross power of 17 MW each. In May 2009, Phase II of the facility entered into commercial operation, with six additional motor-generators.