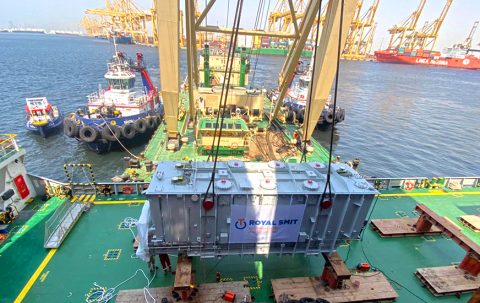 Marine transport specialist, OFCO – Offshore International, and onshore transport and installation specialist Mammoet partnered up to deliver a critical project cargo for a power plant in Sharjah, UAE. Two 140-ton transformers needed to be received from a container vessel in Jebel Ali Port and then transported to the site in Sharjah for further installation.

Following comprehensive risk assessment and engineering, the team proposed receiving the cargo via a double banking operation and marine transport to Sharjah’s Khalid Port. The cargo was discharged by a floating crane onto a landing craft provided by the alliance and then transported to Khalid Port. The transformers were then offloaded using a RoRo method using self-propelled modular trailers, before being transported to the site. Once on site they were installed using a jacking and skidding method.

Marine operations manager at Mammoet MEA, Harshad Deshpande, commented, “By involving the alliance in the logistics of the power plant components, the customer took advantage of the increased flexibility for the cargo move, both marine and onshore, thereby saving time and additional costs such as port charges and double handling of the cargo.”

Captain Maktoum Al Houqani, chief corporate authority officer and acting head of Maritime Cluster at AD Ports Group, and chairman of OFCO – Offshore International said “The recent success of the delivery of critical project cargo intended for a power plant in Sharjah serves as a prime example of how service provider partnerships, such as the one held today between OFCO and Mammoet, can facilitate highly specialised and complex projects combining logistical transport solutions across both land and sea.”

Other examples of successful and streamlined logistics include the loadout and marine transport of critical boiler components from Mina Zayed Port to Ruwais; the delivery of nearly 40 components from Khalifa and Ras Al Khaimah ports to Das Island for an ongoing expansion project and the delivery of two 94t storage tanks from Mina Zayed Port to ICADII jetty in Abu Dhabi.

“With the recent major project awards in the region, we are well positioned to provide the complete package of heavy lifting and transportation services, both onshore and offshore, from local ports to foundation, thereby advancing our continuous pursuit to help our clients speed up productivity,” said Thomas Wylie, Sales Director – Projects, Mammoet MEA.