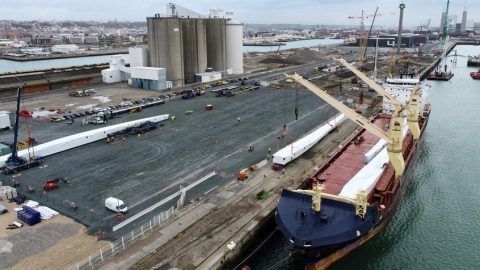 In addition to the sea transport, Blue Water Shipping’s job included transfer of the cargo from SGRE’s warehouse in Aalborg to the loading quay, loading on board the vessels in Aalborg and discharging in Le Havre.

The transport of the two blade moulds for Siemens Gamesa B75 & B81 blade types consisted of four parts each measuring 76.3m x 6.32m x 3.85m and another four parts of 82.7m x 7.4m x 4.73m each. The weight of these components was 56 and 60 tonnes respectively. Along with the moulds, 92 support parts were transported, which will be used in connection with the blade production.

The cargo was shipped in three lots. First shipment was performed by M/V Miena Desgagnés, which departed from Aalborg in the beginning of December 2021, and the following two shipments were both performed by M/V Symphony Space in January 2022.

“Blue Water was physically present during all operations, and for the French part the Wind Logistics team from Esbjerg joined forces with our colleagues from Blue Water Brest. This teamwork helped to remove the potential language barrier and most important of all to locate a qualified subcontractor to perform the stevedore job”, says Andreas Harboe, project manager Wind Logistics, Blue Water Esbjerg.