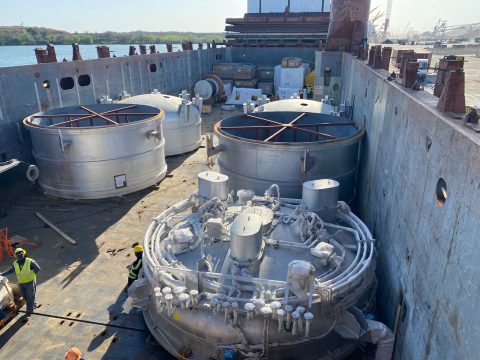 Over a two-month period, F.H. Bertling Logistics handled the OOG transports from India’s port of Ennore, via Freeport and Houston in the United States to the job site in Pisco, Peru. Over the said period, 157 tonnes of heavy vacuum tanks of up to 6.5 meters in width were shipped to Pisco for a steel plant extension project. The heaviest cargo weighed 32 tonnes and involved an end-to-end engineering study to ensure overall safe transportation.

Bertling Lima arranged for the transport door-to-door in close collaboration with its teams in Mumbai, Houston and Miami. The biggest challenge was the arrangement of timely transit service for the shipment arriving from India via Freeport, from where the cargoes needed to be trucked to Houston for loading on a breakbulk vessel and onward transportation. All operations went as planned and all cargoes are scheduled to arrive safely to the jobsite.

The jobsite in Pisco could be the one of the Peruvian steel major, Aceros Arequipa that has invested close to $300 million into the expansion of its Pisco steelworks complex and the modernisation of one of its rolling mills.