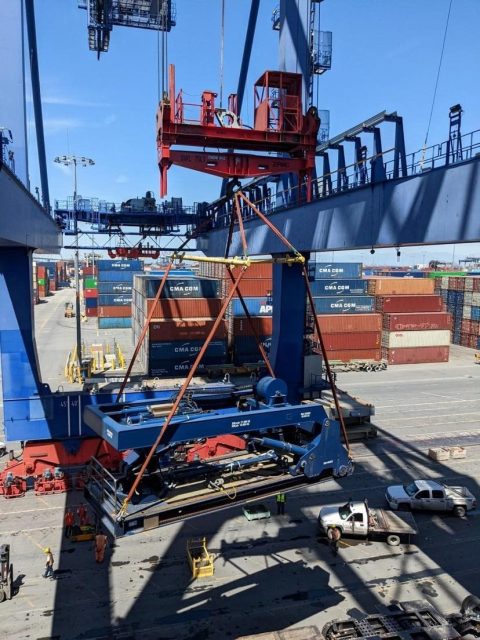 Global Shipping Services (GSS) had to think quick on its feet to make sure a complicated shipment for one of its clients in the oil and gas and renewable energy sector is done within a tight timeframe.

Preparations started in October 2021, with plans to deliver the OOG cargo to the client’s offshore vessel, however, with the initial meet-up destinations being Guam, and Hawai, GSS had to adjust its plans and look for Jones Act vessels. However, a plan was settled to move the cargo from Houston and Los Angeles to Singapore.

“However, we needed the fastest transit time possible, which still meant routing all the way to Los Angeles for a 24-day transit time, with a direct sailing on CMA-CGM as breakbulk,” GSS logistics and project manager, Paul McAuley said.

The cargo consisted of two breakbulk pieces, 65.9 tons and 5.8 tons, plus 21 miscellaneous OOG pieces, which were loaded on seven 40’ OOG flat racks.

“The timing was now the problem, as the cargo was not ready until the very last minute, and we had to truck it 3,048 kilometres,” McAuley said. The company partnered with a Californian trucking company, Piazza Trucking, which was required in order to handle the strict road permitting rules for OOG & overweight loads in the state of California.

McAuley, was on site at the loading point in Louisiana to coordinate truckers, cranes, and the customer yard personnel during the three-day operation. However, even this segment of the operation would not go without unforeseen obstacles as the cargo could enter Port of Los Angeles only an hour prior to loading appointment to the CMA CGM Jules Verne.

“The vessel loading was smooth and fast. Both breakbulk pieces were loaded on board, lashed, and secured within two hours of pulling up alongside the vessel,” McAuley said.