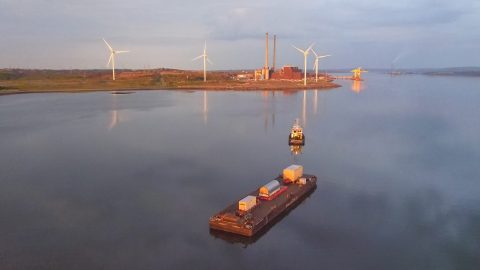 However, in April last year, ESB, Ireland’s energy company, said it will transform the site into a green energy hub, helping Ireland to become a leader in green energy production.

DSG in conjunction with its subcontractors transshipped and offloaded a generator, flywheel, rotor and accessories at Shannon Foynes Port from a heavy lift vessel to both a barge and the quayside (including onward delivery, installation and management of related aspects).

The large generator, cover and flywheel weighing more than a combined 450 tons had to be carefully handled and routed to Moneypoint power station on specialised transport via barge due to prohibitive size for road transport.

DSG arranged the chartering of a suitable tug/barge to perform the transhipment from Foynes Port to Moneypoint including the preparation of the jetty where the cargo was safely offloaded by its transport partners and installed on-site using a tower gantry system.

This Synchronous Condenser is the largest of its kind in the world and will provide a range of electrical services to the electricity grid enabling higher volumes of renewables on the system.

Already last year ESB has commenced work on transforming Moneypoint into a green energy hub, breaking ground on a new €50 million Sustainable System Support facility. This new plant will provide a range of electrical services to the electricity grid which would previously have been supplied by thermal fired power stations. Its operation will enable higher volumes of renewables on the system.

ESB also plans to develop a floating offshore wind farm of 1,400MW off the coast of Counties Clare and Kerry in two phases by ESB and joint venture partners, Equinor. Moneypoint will also become a centre for the construction and assembly of floating wind turbines. A deep-water port already exists at the site, making it an ideal staging ground for the construction of the wind farm.

ESB’s plans also include investment in a green hydrogen production, storage and generation facility at Moneypoint towards the end of the decade. A clean, zero-carbon fuel, green hydrogen will be produced from renewable energy and used for power generation, heavy goods vehicles in the transport sector and to help decarbonise a wide range of industries such as pharmaceuticals, electronics and cement manufacturing.