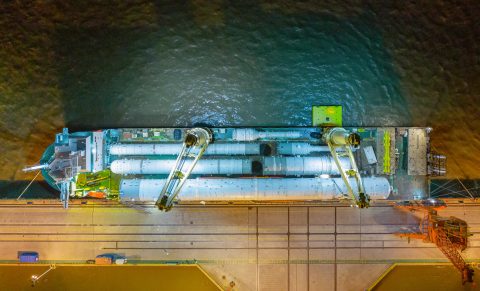 Project logistics specialist, deugro, recently had to devise and carry out an intricate operation resulting in 120,000 freight tons of petrochemical equipment reaching Poland. Cargo was delivered on behalf of deugro’s client Hyundai Engineering, from South Korea and China to Police, Poland for the EGAT project.

The preparation of the project took nearly one year. deugro and dteq Transport Engineering Solutions, both companies of the deugro group, conducted personal site visits to identify potential obstacles and challenges.

The biggest and heaviest cargo units were loaded on two heavy lift vessels at the Ports of Gunsan and Masan, South Korea and at the Port of Zhangjiagang, China. In total 7,156 metric tons were loaded in four days and started their voyage to the Port of Morski in Poland. Since many of the cargo units were not stackable, a customised stowage concept was developed to match the vessel’s stowage capacities.

deugro Korea and dteq supervised the discharge operations at the Port of Morski in Poland, where temperatures dropped to –17°C. Ice breakers and special tugs had to be arranged to break the ice prior to berthing. The main equipment was discharged directly from the vessels onto barges for onward transportation to the Barkowy jetty, six kilometers away.

The roll-off operations at the Barkowy jetty were executed according to a detailed ballast calculation and the exact schedule for the individual barge arrivals. The consecutive barge trips were executed by three main barges, which were reused as a shuttle service to ship all equipment. So, it was not required to reposition the wooden mats that were installed on the deck of the barges to compensate for the height of the new-built ramp of about 700 millimetres for the path of the trailers. The same was the case for the stools on which the RO/RO ramp had to be placed due to the overhang of the 96-meter-long propylene-propane splitter. This led to time, risk and cost savings, while it also minimised waiting times.

Due to the weight of the heaviest cargo pieces, a flyover bridge had to be built to ensure no damage of the adjacent railroad tracks. The cargo units were picked up by self-propelled modular transporters (SPMTs) for their six-kilometer on-carriage journey through the City of Police to the construction site. Given local regulations, the transportation could only be carried out at night.

“To ensure a safe movement, extensive traffic management measures were prepared in advance over a period of one year. These included the construction of new roads, a temporary 650-metric-ton bridge and a new site entrance, the modification of a building along the route and several road widenings. Streetlamps had to be replaced by foldable types, electric railway wires disassembled, local 110-kilovolt power lines shut down and steam pipes and medium-voltage wires moved underground,” said Eun-Ji Baek, Project Manager deugro (Korea).

“During these multiple operations, our teams and partners experienced temperatures down to ‒17°C, heavy snow fall, ice and strong winds—but we can proudly say that all pieces were delivered successfully and safely to the job site. This is another great example of defining logistics and delivering safety with the exceptional cooperation and coordination with the client and all partners,” said Eun-Ji Baek). 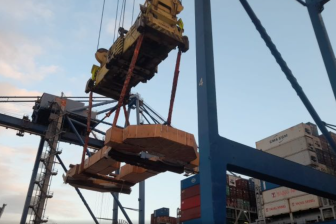 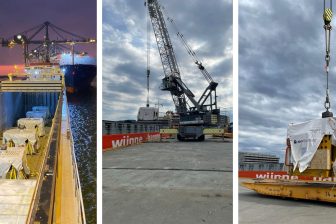 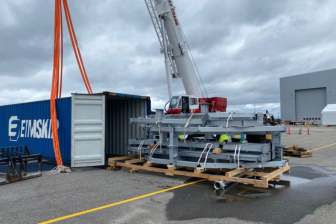