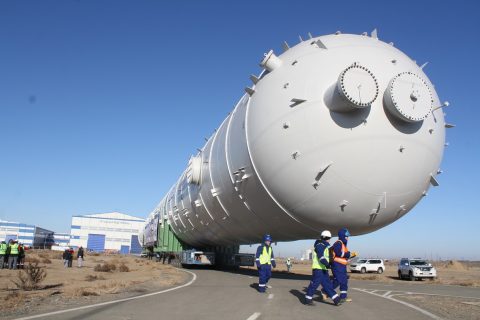 Sarens has moved a giant 1,050-tonne heavy splitter in Kazakhstan using SPMT’s to transport the mega load over 47 kilometres of desert road. The transport was carried out for Kazakhstan Petrochemical Industries which will be using the C3 splitter at a new gas-chemical complex in Karbattan.

Travelling at a speed of only 3.5 kilometres, a 20-men crew had to navigate the 64 axle lines of SPMT through powerlines, traffic lights, poles, road signs, and gantry cranes as well as the traffic. Highways along the route from Atyrau to Karbattan also had to be partially blocked to let the giant load pass safely.

Considering the 105-metre splitter had the length of 20 regular cars, sharp turns were a major challenge. A video of the transport shows how the crew had to turn sharp corners in many small moves.

With all those hurdles to clear, the project is reminiscent of Mammoet’s transport of a giant Boeing 747 which the company moved from Schiphol Airport to the Corendon Village Hotel early last year. That transport was also carried out using SPMT’s which had to cross farmlands, motes and a major highway. In comparison, however, Sarens’ load was more than five times as heavy and the route four times as long.