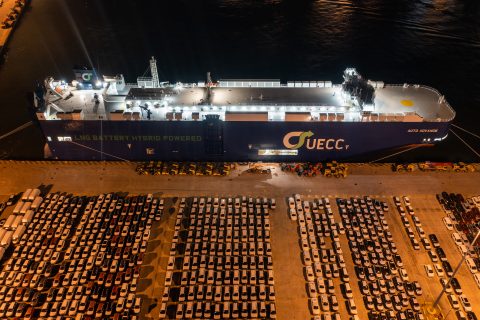 With the recent delivery of its third multi-fuel LNG battery hybrid pure car and truck carrier (PCTC), the Auto Aspire, UECC completed its pioneering trio. The Auto Aspire and its sistership Auto Advance have now been named in Zeebrugge.

Speaking at the naming, CEO Glenn Edvardsen said these vessels “will make a real difference for the environment and for business” as new green regulations are set to shift the market playing field.

The christening of the Auto Advance was performed in traditional manner by Lister with the cracking of a champagne bottle on the hull to a fanfare of vessel horns and a tugboat spraying water, while the Auto Aspire was named in a virtual ceremony.

The Auto Advance has already been trading in North European waters for the past year following delivery last November from China’s Jiangnan Shipyard.

Edvardsen told the audience that the shipping industry could only advance to make progress towards decarbonisation by deciding to move in a different direction. UECC’s owners and board of directors had done just that more than a decade ago by making bold investments in newbuilds and alternative low-carbon fuels to drastically reduce the company’s emissions profile, he said.

“By putting the environment at the top of its corporate agenda, UECC has taken industry leadership in response to the climate challenge. Growing market demands for green operations and new environmental regulations will radically change the way we do business in future,” he said.

The Auto Advance and its sisterships are the first vessels of their kind to be brought into operation, combining a multi-fuel LNG engine with a hybrid battery solution and smart energy management system in an innovative configuration designed for reduced fuel consumption and energy efficiency.

They have been developed by leading sustainable shortsea Ro-Ro carrier UECC together with Jiangnan’s in-house design institute, as well as Wallenius Marine and NYK, in what was described by Edvardsen as “a triumph of engineering, teamwork and international co-operation”.

“This could not have been achieved without the hard work, dedication and expertise of the entire workforce at Jiangnan Shipyard and the UECC design and site team that consisted of Wallenius Marine, NYK and UECC people, who had to overcome difficulties with lockdowns due to the Covid-19 pandemic to keep construction of the vessels on track,” he said.

UECC in step with regulations

The deliveries of the three newbuilds over the past year have proven timely given the IMO’s CII and EEXI/EEDI regulations to cut the carbon intensity of both new and existing vessels are due to kick in from 1 January 2023.

All three PCTCs already exceed the IMO requirement for a 40% reduction in carbon intensity by 2030 that is the purpose of these regulations, according to Edvardsen.

Furthermore, the cost of running ships on conventional marine fuels in Europe is set to increase with the removal of a tax exemption on bunker suppliers in the EEA from next year under the Energy Taxation Directive.

Pollutive ships will also be increasingly penalised with the expected extension of the EU’s Emissions Trading System to shipping from 2024, which could add as much as 50% to the cost of fossil fuel consumption, based on recent carbon pricing, due to the need to buy emissions allowances, according to UECC.

Read also: PCS 2022: Project cargo on RoRo vessels is not a phase, but a fantastic option

Edvardsen believes these regulations will shift the market playing field in favour of environment-focused operators amid increasing demands from cargo owners and charterers for a more sustainable logistics chain.

He said LNG is currently the most environment-friendly fuel available, with an estimated reduction of 25 percent in CO2 emissions, and the PCTCs’ engine is also adaptable for future low-carbon fuels such as bio-LNG as these become available. “UECC has taken advantage of available low-carbon fuel technology to enhance the sustainability of its operations,” he said.

“With new IMO carbon intensity regulations just around the corner and the looming prospect of higher costs for using conventional marine fuel, we are convinced that our timely investments in these newbuilds will make a real difference for the environment and for business. That is called sustainability progress,” Edvardsen concluded. 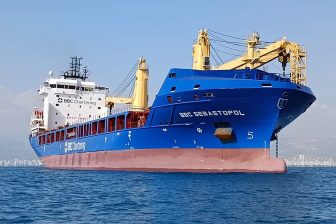 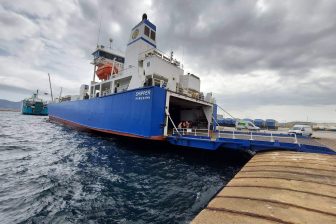 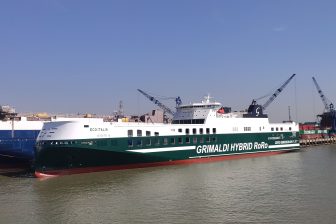