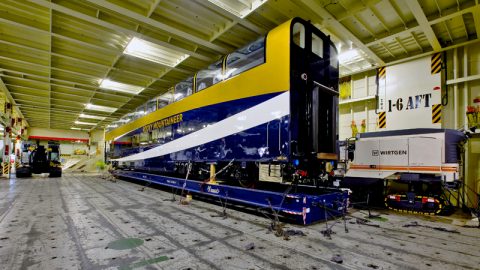 Despite slightly lower volumes, Wallenius Wilhelmsen has increased its income in the first quarter of 2019 thanks to a more favourable cargo mix, strong project cargo shipments in the Atlantic and high fuel cost compensation from customers.

Total income was USD 1,018 million in the first quarter, up 5% compared to the same period last year due to the increased revenues for the ocean segment. Ocean volumes were down 2% year on year due to lower auto volumes, partly explained by unprofitable volumes not renewed in the Atlantic trade. Compared to the fourth quarter of 2018 total income was flat for both the ocean and landbased segment.

Wallenius Wilhelmsen reports an operational profit (ebitda) of USD 218 million in the first quarter, which is a 74% increase in comparison with the same period last year. Net profit amounts to USD 22 million, up 52 million from the net loss of USD 30 million in the previous year.

“This is a good start to the year. I am very happy to see such strong performance in a quarter that is usually seasonally weak and that we have been able to lift rates for several smaller contracts. Our efforts to improve our operations are starting to pay off. On the other hand, the market environment remains challenging and the volume outlook is increasingly uncertain”, says Craig Jasienski, President and CEO of Wallenius Wilhelmsen ASA.

With volumes in the automobile market decreasing, Wallenius Wilhelmsen is looking to expand its breakbulk and project cargo services. Just last week the company published a document citing five reasons why ro-ro vessels are ‘the winner’ for transporting out-of-gauge and heavy cargoes.

Wallenius Wilhelmsen cites its breakbulk expertise, frequent sailings, extra cargo protection through underdeck stowage and efficient storage at its terminals all as important reasons. But the one aspect in which the company differentiates itself from conventional multipurpose and heavy-lift vessels is the lower risk in cargo handling, Wallenius Wilhelmsen states.

“It’s clear that reduced handling equates to reduced risk – and this is certainly true in the world of breakbulk where cargo is both complex and costly. While container and Lift on/lift off (LoLo) transportation involve significant cargo-handling through lifting and therefore increased risk of cargo damage, ro-ro shipments involve limited lifting as a result of rolling cargo on and off the vessel,” the company writes.

The Board of the company says it maintains a balanced view on the prospects for Wallenius Wilhelmsen, although there is uncertainty around the volume outlook in light of weaker auto sales in most markets, potential risk of increased trade barriers and a continued soft macro picture.

“Market rates remain at a low level although a few smaller contracts have been renewed at improved rates in the early part of the year,” the Board states in its quarterly report.