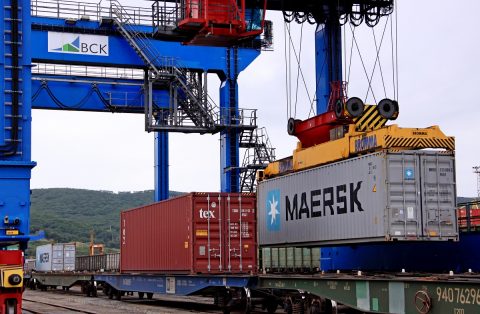 Danish container giant Maersk has launched a combined ocean-rail service from Asia to Europe to offer highly competitive transit times from Asia to major ports in Europe. It is the first multimodel shipping service the company has launched.

The new service combines a short sea service connecting several Asian origins with the port of Vostochniy in the Russian Far East, with the intercontinental rail crossing Russia in just 9 days before reaching St. Petersburg. From there, another short-sea connection distributes the cargo to ports in continental Europe.

The new service allows the shipping company to offer fast transit times. On 7 August 2019, Maersk’s new AE19 service arrived at the port of Gdansk in Poland carrying cargo which had been loaded in Asia less than two weeks earlier.

“We are delighted to offer this new service to our customers in Asia, Russia and Europe as a convenient and highly competitive addition to our conventional Asia-Europe products. AE19 complements our product portfolio by offering a solution with a highly attractive transit time for customers with time-sensitive cargoes, all while remaining cost-competitive”, comments Zsolt Katona, Managing Director, Eastern Europe and Maersk. AE19 is now a standard product with a Maersk bill of lading for both refrigerated and dry containers.

The first AE19 transport carried Korean cargo loaded in Busan and destined for the Polish market. According to Maersk, the service can also “conveniently connect” Japan and other Asian origins with several other ports in Europe close to St. Petersburg, such as Bremerhaven in Germany or ports in Scandinavia and Baltic countries.

The total transit time (ocean and rail) with AE19 from Busan to Gdańsk is 18 days. That is more than twice as fast compared to the conventional ocean only service on that corridor, the shipping company states. The Asian part of the short-sea connection (to Vostochniy port) is provided by Sealand Asia, while the European leg is operated by Sealand Europe. The rail connection and transit customs formalities are provided by Modul, one of the largest private rail operators in Russia. Port handling is done at terminals VSC (port of Vostochniy) and PLP (St.Petersburg), belonging to Russia’s biggest port operator, Global Ports.