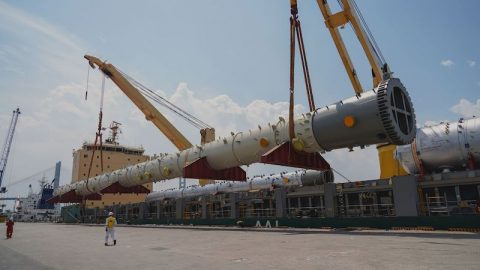 PRESS RELEASE – Heavy-lift carrier AAL has completed the handling and transport of an impressive cargo of South Korean-engineered petrochemical plant components, from Pyeongtaek to Map Ta Phut. The largest of which was a pressure vessel measuring 86 metres in length and weighing close to 360 tons.

The units are to be installed at one of Thailand’s largest integrated producers of olefins and polyolefins for industries like agriculture, automotive, building & infrastructure and medical and comprised over 15,000 cubic metres of individual items.

The heavy-lift vessel involved was one of AAL’s S-Class fleet, the AAL Dampier (19,000 dwt and 700 tons max lift). The cargo operation proved a truly ‘international’ exercise for AAL and testament to its award-winning service and accredited internal systems and communications. The cargo was booked by its chartering desk in Korea, operated by its Australia Office and engineered and supervised by its team in Singapore.