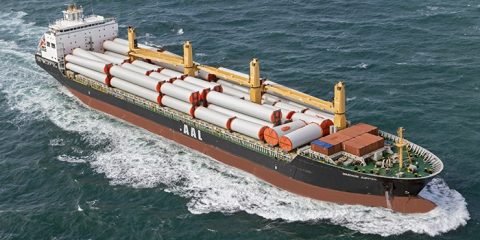 AAL Shipping has added four large multipurpose vessels to its fleet to enhance the company’s service offerings between Asia and Australia, the Middle East, Europe and North America. With the addition of the “mega-size” vessels, the companies owned fleet grows by 22% to almost 740,000 deadweight tons.

The four Warnow-Class (or W-Class) vessels each have a cargo capacity of 33,271 tons. AAL Shipping did not disclose the lift capacity of the vessels, but the cranes of its already active W-Class vessels can lift 60 tons each and have a maximum lift capacity of 110 tons by means of a traverse beam.

For heavy-lift operations, the Singapore-based shipping company has its A and S-Class vessels which can lift up to 700 tons. The W-Class vessels are designed to offer shippers significant cargo intake and economies of scale.

“We’ve invested heavily in developing global infrastructure, a differentiated modern fleet profile and a team of professionals worldwide that can put us in pole position over other carriers to deliver on the demands of today’s global project industry,” says AAL’s Managing Director Kyriacos Panayides.

He added that the AAL retains an appetite for further sustainable growth and wants to ensure that its service remains competitive and differentiated.

According to Dynamar’s 2019 breakbulk shipping report, AAL ranks as the 7th largest multipurpose carrier with an operated (including chartered tonnage) fleet of 707,000 dwt. In the top-25 of multipurpose vessel operators, forest product carriers G2 Ocean (1) and Saga Welco (2) take the top spots by a large margin, followed by BBC Chartering (3), CoscoSSC (4), Grimaldi (5) and Zeamarine (6). In terms of heavy-lift capability, the company ranks 6th with an average lift capacity of 475 tons.