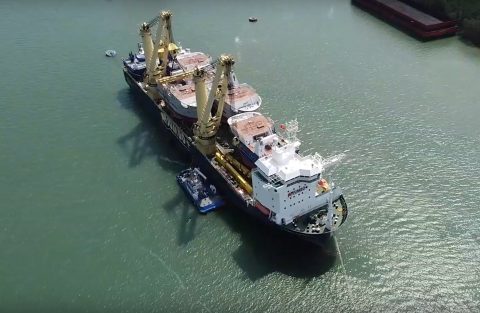 Video: A fishy load for Bluewater and Jumbo

PRESS RELEASE – Blue Water Singapore and Jumbo Shipping have completed a challenging heavy-lift transportation from Vietnam to Norway, moving four trawler hulls of 500 tons each in a single shipment.

“Our scope started in the early stages, where Blue Water’s engineering team assisted with the design and engineering of the cradles for the hull”, says Subrata Podder, Transport Engineering Manager at Blue Water Singapore. “Due to the odd shape of the hulls and the elevated deck, we had to design the cradles strong enough so we could use them for lifting as well. In close cooperation with our carrier, Jumbo Shipping, we succeeded in converting the existing cradles supplied by the yard.”

The loading operation was challenging too. “Blue Water engaged two diving teams to hook the heavy shackles on to the cradles approximately three metres underwater and in an unfavourable current”, says Victo Pay of Bluewater. “But eventually, all four trawler hulls were safely loaded and delivered to the shipyard in Norway for final completion”, he adds.

Jumbo shipped the trawlers with its 13,017 dwt heavy-lift vessel Jumbo Jubilee, which with its two 900-ton cranes was well equipped for the job.