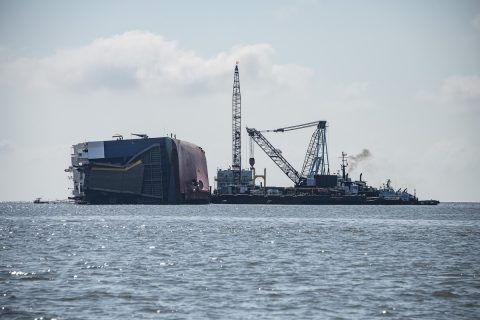 Golden Ray to be dismantled in place

The capsized car carrier Golden Ray will be dismantled in place as safely righting and refloating the vessel is not possible anymore, according to the Unified Command responsible for the salvage operation.

“Maritime experts engaged in the response have determined that it is not possible to safely right and refloat the vessel in a fully intact condition. Consequently, Unified Command is developing plans to remove all of the M/V Golden Ray’s hull, components, and cargo by disassembling the vessel in place”, the Unified Command, consisting of the US Coast Guard, the Georgia Department of Natural Resources and Gallagher Marine Systems, said.

Loaded with 4,200 vehicles, the Hyundai Glovis-operated car carrier (20,000 dwt) got in trouble on September 8th when leaving the port of Brunswick, one of the largest vehicle ports in the United States. As the vessel left the port a fire broke out on board. The pilot deliberately grounded the vessel to prevent it from sinking, a move for which he was praised. As a result of his action, all 24 people were safely rescued including four crew members who spent a day trapped inside the vessel.

The Golden Ray has been leaking oil. According to the Unified Command, 449 personnel and 71 vessels are responding to the incident. Salvors are emptying the fuel tanks of the ship and have removed 225,000 gallons of oil so far, while response teams are canvassing the sea and shoreline for oil-impacts.

Oiled nearby marshes have been treated with a sphagnum moss-based sorbent to prevent the oil from spreading and allow for its natural degradation. Other response teams are patrolling area beaches to recover any tarballs which have come ashore. In total, 14,700 feet of containment boom has been deployed to protect sensitive areas. Pollution mitigation and response efforts will continue throughout the duration of the removal operation.

It is unclear how long the salvage operation of the Golden Ray will take. However, a similar removal of the car carrier Baltic Ace, which sank in 2012 following a collision with a general cargo vessel, took nearly three years to complete.