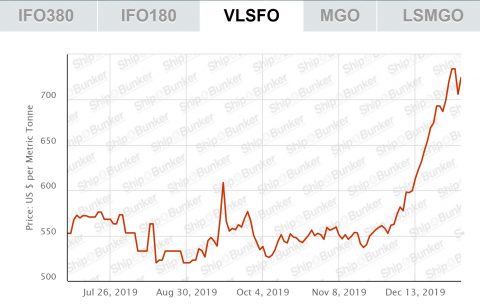 With IMO 2020 now in effect, fuel prices for low sulphur fuel have soared, shooting up almost 50% in major bunker ports like Singapore. Prices for heavy fuel oil, on the other hand, have remained fairly stable and companies that have invested in scrubbers will feel validated in their choice.

In two of the most prominent bunker ports on the eastern hemisphere prices for 0.5% fuel oil went up around 50%. In Singapore, a tonne of very low sulphur fuel (VLSFO) today costs USD 724.50 compared to roughly USD 550 at the beginning of December, data from Ship&Bunker shows.  In Fujairah, prices increased even more from USD 570 on December 3rd to USD 777.50 today.

In comparison, the price hikes in major Western ports have been slightly slower-paced. At the beginning of December, a tonne of VLSFO cost just shy of 500 dollars in Rotterdam versus USD 593.50 now. In Houston, prices rose from USD 578 to USD 661.50.

Prices for heavy fule oil have remained fairly stable over the past months, varying from just under USD 300 to USD 370, depending on the bunker port.