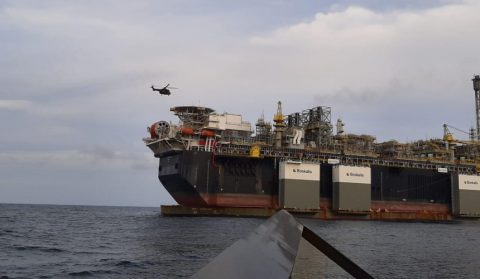 The world’s largest heavy cargo vessel, Boskalis’ Boka Vanguard, has interrupted its voyage from China to Brazil in South Africa to land five seriously ill and one deceased seafarer. It concerns crew members of the new oil production ship Petrobras 70 carried onboard the Boka Vanguard.

The Boka Vanguard is transporting the ship from the construction site in Qingdao, China, to Rio de Janeiro. Boskalis stated to the Russian Maritime Bulletin that there was no accident on board, as initially reported, but that those on board had fallen seriously ill along the way.

The ship then set course for the South African port of Durban. The sick persons on board were taken off-board by helicopters of the Air Force to transfer them to hospitals ashore. It is unclear what made the patients sick. They would have been on the Petrobras 70 on the deck of the Vanguard during transport.

Update: Alcohol poisoning cause of illness

Apparently, the six crew members, all Brazilians, drank illegally from a cleaning agent, which in all likelihood contained a mixture of ethanol and the highly toxic methanol. The Dutch contractor has stated the five sick crew members successfully recovered from their poisoning.

The company stresses that it has a zero-tolerance policy with regard to alcohol on its offshore vessels. The Vanguard has meanwhile resumed its trip to Brazil.

This article first appeared on Nieuwsblad Transport and SWZ|Maritime, both sister publications of Project Cargo Journal.